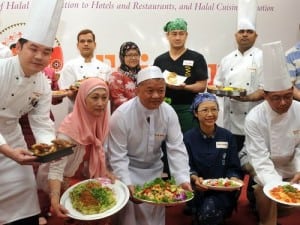 Taipei, July 13 (CNA) More Taiwanese companies are interested in Muslim markets and have applied for Halal certification, which identifies them as trustworthy establishments that serve products in compliance with Islamic dietary law, according to the country’s main trade promotion body.

As of June, nearly 150 local firms had obtained Halal certification, with some other 130 pending, the Taiwan External Trade Development Council (TAITRA) said in a recent statement.

“A small, local Muslim industry has formed,” it said.

Business opportunities, TAITRA said, lie in not only the food sector, but also other commodities such as Islamic swimwear for women, prayer rugs, garments that make people feel cool and smartphones installed with the Koran.

Against this backdrop, the government has set up a task force to promote and develop Muslim markets worldwide, TAITRA said.

There are an estimated 1.6 billion Muslims around the world, making Islam the world’s second-largest religion after Christianity, TAITRA said, citing a 2012 report by the Pew Research Center.

There are at least 31 restaurants throughout the country that are now certified as Halal, according to the Tourism Bureau.