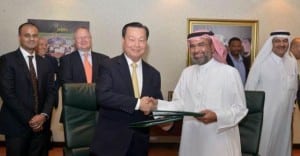 the largest food companies in the Middle East, have announced a joint venture to bring sustainable, innovative and quality seafood products to Middle Eastern consumers.

TUF has more than 20 seafood plants operating across Asia, Europe, Africa and North America. It operates in several seafood categories and owns leading global brands such as John West, Chicken of the Sea, Petit Navire and Mareblu.

The company is the largest processor of tuna globally, and operates the world’s only tuna-focused global innovation incubator in partnership with the Mahidol University.

Savola Foods, a closed joint stock company and a subsidiary of the Savola Group, a Saudi public listed company, focuses on mass-consumer foods such as edible oils, sugar and pasta.

The joint venture will also leverage the deep consumer and marketing expertise of both partners, including marketing the John West brand in Middle Eastern markets.

The product lines for the joint venture will include all seafood products, including ambient, frozen and chilled seafood, as well as ready-to-eat meals. It will operate in 12 Middle Eastern markets: Saudi Arabia, the United Arab Emirates, Oman, Kuwait, Bahrain, Qatar, Jordan, Lebanon, Syria, Iran, Iraq and Egypt.

Thiraphong Chansiri, president and chief executive officer of Thai Union Group, said the Middle East region was one of the fastest-growing seafood markets. It is a well-established seafood culture with increasing per-capita consumption.

Based on reported statistics, the core Middle Eastern markets such as Iraq, Iran and Saudi Arabia alone had seafood sales in excess of US$2 billion (Bt72 billion) last year and have experienced average sales growth of more than 4 per cent over the last five years.

It is anticipated that the joint venture will be able to capture a significant share of that market, and accordingly, the annual sales revenues within the next three to four years are expected to be in excess of $400 million.

Maaraf Abderrahim, CEO for business development of Savola Foods, said: “Seafood plays a special role in our consumers’ diets. Yet the products offered in the market appear to be rather basic. We are very pleased to join hands with Thai Union and are committed to bringing best-in-class products to the market.”

Thai Union and Savola Foods plan to invest $30 million to $50 million over the next two years in the joint venture.