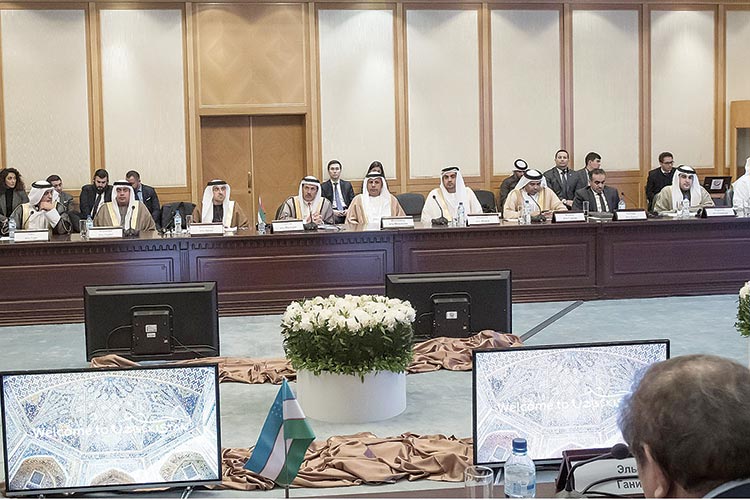 Mansouri speaks during the third session of the Joint Economic Committee between the UAE and Uzbekistan in Tashkent. WAM

Tashkent: The third session of the Joint Economic Committee between the UAE and Uzbekistan was held recently in Tashkent, the Uzbek capital.

As part of the Committee’s agenda, both countries agreed to enhance economic, trade and technical cooperation based on a number of policies and programmes, including a range of priority sectors of shared interests. Most notably, the UAE and Uzbekistan agreed to increase trade exchange volume and investments in renewable energy, agriculture, food production, textile, infrastructure and tourism sectors, as well as cooperation in small and medium-sized enterprises, SMEs, civil aviation, tourism, manufacturing, financial sector and Halal industry.

In a speech during the committee meeting›s main session, Al Mansouri said that the strong bilateral relations between the UAE and the Uzbekistan are reinforced by cultural and historic ties and Islamic affiliation. He pointed out that the economic aspect is an integral part of the bilateral relations.

The UAE government is looking forward to the committee’s outcomes as an important factor to enhance economic partnerships between both countries according to a clear vision and direction, Al Mansouri explained. “This will help identify areas of cooperation for the future, discuss ways to increase trade exchange volume, discuss opportunities for partnership in both countries’ markets, agree on policies for coordination and exchange of expertise between the concerned parties on both sides. It will also support the efforts of the private sector in both countries to overcome obstacles and will facilitate their endeavours to build business partnerships and investment projects that serve the shared interests and economic objectives of both Uzbekistan and the UAE.”

He pointed out the importance of joint efforts to increase the volume of non-oil trade exchange. In 2017, this figure reached $387 million, which he emphasised is not in alignment with the aspirations and potential of both countries. “This highlights the need for further cooperation and coordination during the next phase to strengthen trade between the two countries,” Al Mansouri affirmed.

The UAE Minister also called on Uzbek companies to take a closer look at the opportunities for cooperation in the UAE and to build effective partnerships with UAE companies, especially in fields of agriculture and food products, energy and renewable energy, textile industries, tourism, transport and financial services. He pointed out that Expo 2020 provides an ideal opportunity to strengthen partnership with Uzbekistan at the governmental and private levels, in order to start a new phase of trade and economic cooperation between both countries.

For his part, Ganiev Elyor Majidovich said that the UAE is an important strategic partner for Uzbekistan in the region, and that both countries have built bilateral relations based on common interests.

He emphasised that his country is committed to supporting all efforts of joint cooperation between both countries, especially in the sectors of economy, trade and financial and investment cooperation, as well as developing partnerships in education, health care, tourism and various development sectors that serve the interests of both parties.

During the meeting, the committee reviewed topics of common interest including, the increase in trade exchange rates and the promotion of mutual investment in sectors of energy and renewable energy, agriculture, food, infrastructure, tourism and textile products.

Both parties also agreed to implement mutually beneficial investments with the support of a joint venture company with a declared capital of $1 billion. These are currently underway and are being established by the Abu Dhabi Fund for Development and the Uzbek Fund for Reconstruction and Development.