A ‘Higher Committee for the Development of Islamic Economy’ has been formed, under the patronage of Dubai Crown Prince Sheikh Hamdan.

Mohammed Abdullah Gergawi, Minister for Cabinet Affairs and Chairman of the Sheikh Mohammed bin Rashid Al Maktoum’s Executive Office and the Chairman of the Higher Committee for the Development of the Islamic Economy Sector, said the committee had been given six months to develop a strategic plan to transform Dubai into the capital of Islamic economy.

From now, the committee has three years to transform Dubai as the world’s capital of Islamic economy.

The committee has a plan covering 46 initiatives, of which seven to eight major ones were discussed today.

After the launch ceremony, Sheikh Mohammed said: “The continued developments and changes in the global economy increase the need to constantly diversify the structure of our national economy.

“Our firm principle in the UAE is not to rely on one single economic resource or sector. The Islamic economy is not new to us, In fact we have accumulated considerable expertise in this field and our aim is the global arena.”

Sheikh Mohammed added: “In the UAE, we excel at the public – private sector partnership, where both sectors work as one team.

“Therefore, I am optimistic about the success of the Islamic economy sector and about placing Dubai on the international economic map as the global destination of choice that provides Islamic products, finance and services as well as raising the standards for the management and quality of this sector to new levels.”

Sheikh Mohammed said: “Our aim from all economic initiatives we launch is to improve the quality of life and providing opportunities that ensure a prosperous future for coming generations.”

Sheikh Hamdan bin Mohammed bin Rashid Al Maktoum said: “The strategic plan for developing the Islamic economy sector is a road map for the future which sets the frameworks for uniting the efforts of various institutions and parties operating in this sector in line with the vision of His Highness Sheikh Mohammed bin Rashid Al Maktoum to position Dubai as the global capital of the Islamic economy.”

Sheikh Hamdan added : “When His Highness Sheikh Mohammed bin Rashid Al Maktoum specified the goal, he wanted an Islamic economy sector with a global vision and with local human resources to serve our national economic interests. His vision was to turn Dubai into the future global capital of the Islamic economy.”

Sheikh Hamdan also added: “The vision is clear. The determination is high. The leadership is decisive . The operational teams are ready, and the obstacles ahead will be met by exceptional people.”

The three key pillars of the Islamic economy plan are Dubai being a hub for sukuk and Islamic financial services; a market leader for halal goods and services, including products and certification; and creator of a global legislation for regulation of the Islamic market, said Gergawi.

The total GDP of the world’s Islamic nations is put at $8 trillion, according to figures released today by Eisa Kazim, DIFC Governor and member of the committee.

Six government departments presented their plans on how they intend to move forward making Dubai the capital of Islamic Economy.

Sami Al Qemzi, Director General of Dubai Department of Economic Development, and member of the committee, said by the second quarter fo 2014, an Islamic Governance Centre would be set up in Dubai.

Abdulrahman Al Ghurair said Dubai Chamber plans to conduct international exhibitions, conferences and reference studies in an effort to attract and organise leading global Islamic exhibitions and events, organise the Global Islamic Economy Summit next November and increase co-ordination with OIC and the Islamic Chamber of Commerce and Industry, apart from attracting some of the best Islamic economy companies from around the world.

Dr Hamad Al Shebani of the Department of Islamic Affairs and Charitable Work said the lack of clear legislation to regulate the production of halal products and an absence of a recognised international body will guide his department towards establishing a legislative and regulatory environment.

Hussain Al Qemzi of Awqaf and Minors Affairs Foundation said the plan is to establish an International Endowment Authority by the first quarter of 2014 with an idea to spread the culture of endowment, transfer the experience of development through endowment in Dubai, promote best practices and increase the economic role of endowments. 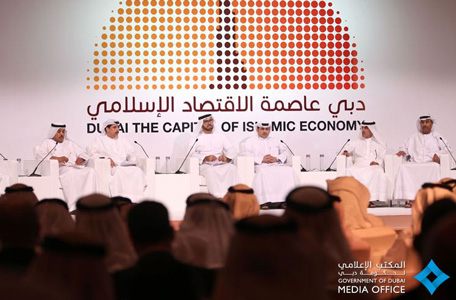 The global Islamic economy sector is estimated to be growing at a rate of 10 to 15 per cent per annum.

Some of the main sectors driving this growth are Islamic finance and Islamic insurance.

Islamic finance is the main driver with the demand for Islamic finance instruments estimated to grow in the coming years to exceed US$421 billion by 2017. IMF alone has predicted a sukuk listing of US$3 trillion in 2015. Reports also suggest that global Islamic banking assets are set to cross US$1.8trillion in 2013 – a 12.5 per cent increase year on year .

Islamic insurance – Takaful has witnessed a comparatively higher rate of growth compared to conventional insurance sector  and is expected to reach US$25billion by 2015 end from US$12billion in 2012. The GCC with 77 operators has the largest number of insurance operators.

With growing popularity of halal products across the globe and even among non-Muslim communities, the current value of global halal food industry is estimated at US$2.77trillion and is expected to grow at 4.8 per cent annually to reach US$6.4trillion by 2020.

Dubai is even working towards establishing bodies that ensure the implementation of Islamic quality standards for institutions operating in this sector. Dubai also plans to address opportunities that consumer services offer with regard to halal cosmetic products, pharmaceuticals and fashion.
Senior officials, business leaders, representatives of all economic sectors and media were present at the launch.

Raft of global Islamic institutions to come up in Dubai

Dubai is set to witness a raft of new global institutions relating to Shariah-based economy over the coming months.

The move is part of the initiative to transform the emirate into the world’s ‘Capital of Islamic Economy’ unveiled by His Highness Sheikh Mohammed bin Rashid Al Maktoum, Vice-President and Prime Minister of the UAE and Ruler of Dubai, on Saturday.

He has given the newly set up Higher Committee for the Development of the Islamic Economy Sector, three years to attain this goal.

Gergawi explained that the goal of transforming Dubai into the world’s capital of Islamic economy would rest on a few main pillars – creation of world-standard legislation and regulatory mechanisms; developing financial instruments and services, especially sukuk; promotion and accreditation of the halal market; and boosting Islamic digital economy.

One of the first initiatives planned for is for Dubai to host a global Summit for Islamic Economy next month.

Another is the creation of a global Award for Islamic Economy.

Other initiatives include Family-friendly tourism, Islamic fashion, art and design, a global network of Islamic Economic information and education and a global centre for Islamic economic standards and certification.

Several global Islamic institutions will be created under these initiatives.

• In the second quarter of 2014, Dubai will host the world’s Islamic Governance Centre to encourage Islamic investment and support industries.
• Another initiative is to create the Supreme Council for Islamic Standards. This will create world standards in legislations and regulatory environment.
• The International Endowment Authority will be created to leverage and boost the $1 trillion Waqf globally.
• The Adahi Meal as Endowment Project will also be created.
• In the first quarter of next year, Dubai will witness an International Laboratory to test halal products.
• At around the same time, the emirate will also host the world’s halal Accreditation Centre for providing ‘halal’ certification.

Al Gergawi said these are just some of the close to 50 initiatives envisaged to transform Dubai into the global capital of Islamic economy.