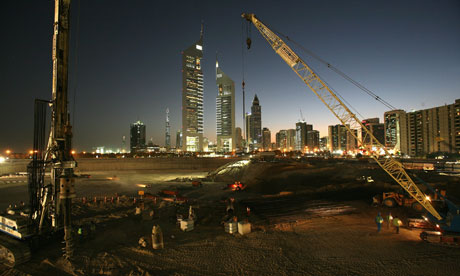 Visiting Dubai on a work trip, I was wandering the resplendent hallways of my a hotel searching for an ATM when a commotion occurred. Some of the hotel staff were scurrying about, looking obviously distressed. I asked one of them if there was any trouble and he responded with a glossy smile. There was no trouble, madam, and was there anything he could help me with?

A few hours later, I discovered that there had indeed been trouble. A man – an Indian worker – had jumped from Burj Khalifa, the tallest building in the world, and a symbol of Dubai’s prowess. It is a needle-shaped skyscraper which impales the bleak Dubai sky.

Originally known as Burj Dubai, the building was planned during the city’s orgiastic construction phase, where the sky was the limit, but completed after the bubble had burst. It was then renamed in honour of Abu Dhabi’s ruler, Sheikh Khalifa bin Zayed, who rescued Dubai from its debt crisis.

Gossip about the suicide was horrifyingly callous. “It only took 10 months” [after the opening of the hotel], one person said. “He’s inaugurated the building,” another almost laughed. “Why did he jump?” I asked. People shrugged. He’s probably an expatriate worker, I was told – it’s usually them.

There is nothing remarkable about people being desensitised to suicides. London commuters on the underground can probably understand, but when the suicides are almost exclusively from one minority working in certain jobs, it is nothing short of inhumane. The dark underbelly of Dubai is never far away and sometimes we see the effect of this uglier side lying lifeless on a pavement.

The man, apparently an Indian cleaner who had been denied a holiday, was scraped off the floor on which he landed on and life went back to normal. Tourists and expats lapped up the luxury and sunshine, while workers from south Asia, little moving dots on the facades of the buildings under construction throughout the city, were ferried in buses to and from their living quarters. A couple of days later, another Indian man jumped from Jumeirah Lake Towers.

The Indian consulate in Dubai has since revealed that at least two Indian expats commit suicide each week. The consul-general stated that most are blue-collar workers who are either semi-skilled or skilled.

There is something deeply sinister about Dubai luxury, even more so since the local economy went into spectacular decline with the sovereign debt default in 2009. Fawning staff (almost exclusively expatriate) encircle you from the moment you arrive. From handler to driver to receptionist to concierge, the over-the-top attention is underpinned not by a dedication to a superlative service, but by fear.

If there is a problem, grovelling apologies are proffered and olive branches extended – all to prevent a complaint that in today’s economic climate almost certainly means dismissal or extreme chastisement. People, nationalities and jobs exist in silos, isolated from each other. You can be in Dubai for days and not interact with a local.

It seems to me a place where the worst of western capitalism and the worst of Gulf Arab racism meet in a horrible vortex. The most pervasive feeling is of a lack of compassion, where the commoditisation of everything and the disdain for certain nationalities thickens the skin to the tragic plight of fellow human beings.

Psychologically, these workers are isolated and alienated; practically, they are trapped by draconian sponsorship laws in the UAE, and in debt to agents back home. This is exacerbated by the fact that there is such little enforceable employment law in these markets. Such economies have developed so rapidly that social and civic attitudes have not kept pace, and the sponsorship system is open to abuse and still victimises migrant workers throughout the Gulf.

Dubai is considered an emirate under a popular, liberal, benevolent and forward-looking ruling family that has managed to develop the economy and extend its hands to the outside world without compromising its culture or values. Nobody is naive enough to claim that capitalism does not claim casualties and create classes, or that expatriates from the sub-continent have not made happy and relatively lucrative lives in the region, but Dubai’s name is becoming stained by the blood of migrant workers.