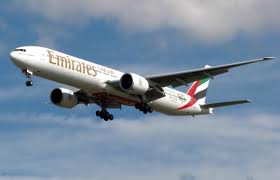 Emirates, the world’s biggest airline by international passenger traffic, is considering the sale of Islamic bonds as it seeks to raise $4.5 billion in the financial year starting April 2014 to pay for planes.

The Dubai-based carrier will need an average of $5.34 billion a year over the next five years, including 2013, to finance 119 aircraft deliveries, Brian Jeffery, senior vice president for corporate treasury, said in an interview at the airline’s headquarters, which overlook Dubai International Airport. Among financing options the company could tap the sukuk or non-Shariah-compliant bond market early next year, he said.

Emirates last sold $1 billion of Islamic bonds in March, before speculation that the U.S. Federal Reserve will reduce its bond purchasing program prompted an emerging-market debt selloff and sent yields higher. The state-owned airline is undergoing a period of rapid growth as its home base Dubai recovers from the 2008 global financial crisis. Passenger traffic through Dubai airport jumped 17 percent in the first half to 32.6 million and hotel occupancy reached 84.6 percent.

The debt market is currently volatile, “and that is not ideal for us, but volatility has not stopped us from issuing bonds in the past,” Jeffery said last week. “I’m pretty confident that, given the brand and the credit story of Emirates, sufficient funding will be available.”

Average yields on global corporate sukuk have risen 46 basis points to 4.62 percent since the Fed said June 19 it might taper its asset-purchase program as early as this year, according to the HSBC/Nasdaq Dubai Corporate US Dollar Sukuk Index. The yield on Emirates’ $1 billion sukuk, which carries a 3.875 percent profit rate, increased 40 basis points, or 0.4 of a percentage point, in the period to 5.1 percent at 4:03 p.m. in Dubai. The so-called amortizing notes have a final maturity date of March 2023 and a weighted average life of five years.

Emirates’ decision on whether to sell bonds will depend “on pricing and an acceptable structure,” Jeffery said. Other options for funding are commercial debt, operating leases and export credits, which are typically restricted to 20 percent of the deliveries, he said.

Emirates is established as a major global carrier, serving 134 destinations in 76 countries. Its fleet of Airbus A380 double-deckers has turned Dubai into an international aviation crossroads, stripping business from veteran carriers such as Air France-KLM Group and Deutsche Lufthansa AG of Germany.

Emirates, which begins its fiscal year on April 1, needed $5.5 billion this year to finance 25 aircraft deliveries, Jeffery said. Of this, it raised $2.9 billion from an enhanced equipment trust certificate issued in June 2013 through Doric, vanilla finance leases and export credits, and pure operating leases for two freighter aircraft. It also issued $750 million in non-Shariah compliant bonds in January.

Of the 25 aircraft, financing for 21 has been arranged. Emirates is now evaluating offers for the remaining four aircraft for U.S. and European export credits, Jeffery said.

“The availability of funding generally, and the factors that influence that, are what keep me awake,” said Jeffery. “If the banks are having their own problems or the bond markets collapse that will affect us.”

Net income at Emirates soared 34 percent to 3.1 billion dirhams ($845 million) in the last fiscal year. The same year presented the company with its “real test” as it received 35 aircraft and had to raise $7 billion, Jeffery said. On average the airline takes delivery of 24 planes a year.

The carrier’s ability to raise funds proves it has no need for a credit rating, Jeffery said. Emirates boasts a fleet of 201 aircraft and has 192 on order worth more than $71 billion at list prices, according to the airline’s fact sheet.

Jeffery said he is “not too concerned” that runway repairs at Dubai International Airport starting May 2014 would affect the airline’s financing capabilities, and said it is being dealt with at “the commercial and operational level.”

Meanwhile Emirates has no plans for an IPO, as far as Jeffery is aware. The decision rests with the Dubai government, the airline’s owners, he said.