DUBAI, WAM  The International Halal Accreditation Forum, IHAF, has announced its latest milestone, having increased its membership to 32 within 1,000 days of being operational.

The 32 member-countries represent a halal economy that is more than $700 billion and accounts for approximately 34 percent of the $2.1 trillion global halal economy.

Based on the data from the State of the Global Islamic Economy Report 2018-2019 in collaboration with Thomson Reuters, nine out of top 15 countries in the global Islamic economy are IHAF members, namely UAE, Bahrain, KSA, Oman, Jordan, Pakistan, Kuwait, Indonesia and Turkey. The report also showed that among the new entrants in the halal food exports, at least two are IHAF members, which are Kyrgyzstan and the Philippines.

Emphasizing on the importance of this achievement and the role of IHAF in this breakthrough, Mohamed Saleh Badri, IHAF Secretary-General, said, “From its inception in 2016, IHAF has been continuously working to build and maintain trust and confidence in halal products and services being offered around the world by harmonizing conformity assessment practices in the field of halal. We have also strategically forged international partnerships with leading international organisations that facilitate trade on a global level.”

IHAF’s collaboration with International Accreditation Forum, IAF, and International Laboratory Accreditation Cooperation, ILAC, is considered to be a significant milestone as this not only recognises the Forum’s role in the international arena but also is expected to result in opening new doors to the world trade movement as well as in ensuring the seamless passage of various halal products and services among countries.”

Recent reports indicate that four out of top five exporters of halal meat and live animals to the Organisation of Islamic Cooperation, OIC, countries are IHAF members, which include Brazil, Australia, India and USA. 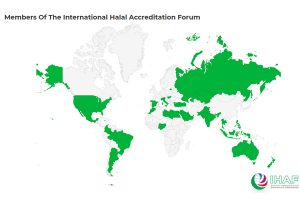 While four of the five leading halal food source markets are IHAF members, namely, Brazil, India, Argentina and Russia; four out of the top five halal food importers are likewise member-countries of IHAF including KSA, UAE, Indonesia and Egypt.

“IHAF is in the forefront of building awareness and knowledge on halal across the globe. We have been part of significant conferences such as the 2nd China-UAE Islamic Banking and Finance Conference in Shenzhen, China, that was focused on accelerating the growth of global halal consumption, as halal products become less expensive to produce and transport overland. Likewise, IHAF has been actively initiating and conducting its own halal awareness workshops and training programmes with events being recently organised in Kyrgyzstan, Egypt, Costa Rica, Hong Kong and Tajikistan. Programmes that are focused on imparting knowledge on halal have been effective in engaging various stakeholders especially the assessors, technical experts and traders,” Badri added.

Emanuele Riva, Vice Chairman of IHAF, and Vice General Director at the Italian National Accreditation Body, ACCREDIA, commented, “The rise in membership from nine to 32 in a span of three years, and its contribution to the majority of the total global halal economy, is not only a pivotal milestone for IHAF but for the future of the halal industry at large. We look forward to welcoming more members to IHAF this year.”