Global Islamic finance assets expected to surge to $3.8 trillion by 2022 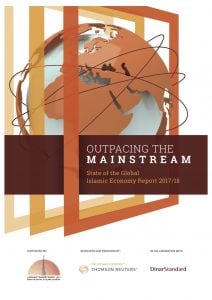 “This year’s Global Islamic Economy Indicator testifies to the success of the UAE in pioneering an appropriate Islamic economy ecosystem within a short period, when compared with other nations that have been active in fostering this niche economic system — especially in the halal industries space. Sharia-compliant sectors are central to the Islamic economic system and attract the most investment — thereby facilitating an Islamic economy-friendly environment,” said Sultan bin Saeed Al Mansouri, UAE Minister of Economy and Chairman of DIEDC.

The report evaluated the health of the Islamic economy ecosystem across more than 73 countries, based on equally weighted key metric categories, including governance, awareness, and social considerations. The UAE’s exceptional performance highlights the synergy between the government’s wise vision and the practices of the private sector.

This report estimates that Global Muslim spending across lifestyle sectors was $2 trillion (Dh7.34 trillion) in 2016, while the Islamic Finance sector has $2.2 trillion in total assets. Food and beverage leads Muslim spend by category, at $1.24 trillion, followed by clothing and apparel at $254 billion, media and entertainment at $198 billion, travel at $169 billion, and spending on pharmaceuticals and cosmetics at $83 billion and $57.4 billion respectively.

Malaysia continues to lead the Global Islamic Economy Indicator, followed by the UAE and Saudi Arabia. Halal Food is the largest and most diverse sector of the Islamic Economy. New entrants have come into the market, and product offerings have firmly moved beyond being meat-focused to include candy, ready-made meals, snacks and children’s food. Established players are expanding at home and abroad, including through franchising. Multinationals have also made major investments in Muslim-majority markets, anticipating rising demand.

Meanwhile, Private Equity investment and sovereign wealth funds have been particularly active, and a number of Halal Investment Funds are in development. The International Halal Accreditation Forum established in the UAE in 2016, with 27 global accreditation bodies as members, is a further positive development for the industry.

The Islamic Finance sector continues to evolve. Both Muslim majority and Muslim-minority countries are recognising the segment’s potential, with banks becoming fully-fledged Islamic institutions, and governments encouraging Islamic Finance to improve financial inclusion. The sukuk industry continues to mature, with a number of debut sukuk issuances over the past year and more in the pipeline.

“Over the past few years, the findings of the report have continually provided us with new insights and perspectives to better understand the dynamics of consumer behaviour among Muslims across key markets. Each year the report offers fresh facts and statistics that project a promising future for the Islamic economy sector,” said Abdullah Mohammad Al Awar, CEO of DIEDC.

The Global Islamic Economy Indicator (GIEI) is a composite weighted index intended to show the current state of Islamic Economy indicators across each of the Islamic Economy pillars that have been defined in this report series. The Indicator is not a ranking of current size and growth of each market, but evaluates the quality of the overall Islamic Economy ecosystem including social considerations each has relative to its size.

The ranking of the index is weighted towards Islamic finance and halal food given their relative sizes to other sectors.