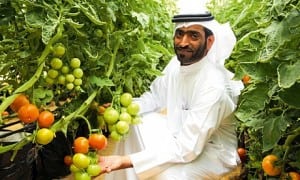 Abu Dhabi: The UAE may soon start increasing its share in the meat market by raising supply levels, and competing with countries such as Australia and New Zealand, according to the Abu Dhabi Food Control Authority (ADFCA).

“To call ourselves competitors would be using a big word. But if we continue moving in the same direction, there will be a chance to be in the level that, at least to locals, will be enough.

One example I can give is the Western Region where during Eid Al Adha last year, which is a time when a lot of people buy meat, there were no animals brought from outside the Western Region,” said Mohammed Jalal Al Rayssi, director of communication and community service division at ADFCA.

Al Rayssi was speaking to Gulf News on the sidelines of the SIAL Middle East Food Exhibition, which is running at the Abu Dhabi National Exhibition Centre (Adnec) until November 26.

“Local products are getting to a certain point where we can reach saturation. Generally, it’s difficult to reach independence in all kinds of food products, but there are some areas that we can highlight like vegetables, and meat. But owners [of farms and live stock], business owners, and authorities should work together to reach that point,” he said.

According to the Economist Intelligence Unit, GCC food import demand is expected to hit $53.1 billion by 2020 — up from $25.8 billion a decade ago, with reliance on imported food reaching 80 to 90 per cent.

However, Al Rayssi was optimistic about the fruit and vegetable market in particular.

“With the population we have, there are some challenges to drop our reliance on imports. But there are good signs from the production of agriculture in Abu Dhabi. Today, we have local harvest, which is increasing, and soon, some of the vegetables will be enough for the market,” he said.

In June, the Abu Dhabi Farmers Service Centre said that farms in Abu Dhabi are expected to produce 38,000 tonnes of fruit and vegetables during the 2014-2015 season, which starts this November and ends in October 2015.

The director added that the government is trying to encourage those who own farms, and live stock of animals to participate in the market and provide their supply.

Al Rayssi said the Authority is working with the Abu Dhabi government to encourage business locally and internationally to work in the food industry. This aims to help increase food production in the country, and in turn, reduce reliance on imports.