For over a decade now, Islam has been front page news. However, this constant media discourse has focused on a distorted image of the Muslim world, shining only a black and white light on what should be a whole array of colours.

A new platform has been born out of the need to showcase the widely unknown contributions of the Muslim community. Alchemiya sets out as a new and unique online television channel that aims to “present the world’s best content about Muslim life”. 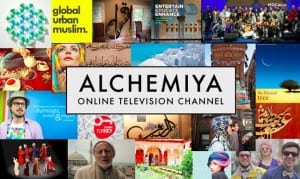 Through his decades of experience as producer for British mainstream television including the BBC and Channel 4, Alchemiya´s CEO, Navid Akhtar realized many Muslims are not getting a holistic choice when it comes to watching programs that confirm their identity: “We are overwhelmed with a negative image of Islam and what it means to be a Muslim today. At the same time there is very little focus on the Contemporary Muslim identity, an identity that is finding balance between the demands of modern life and faith. These progressive, creative Muslims get very little coverage on television.”

In this way, Alchemiya’s content is based on Muslim values but its purpose is to provide its audience with “a spiritually uplifting and entertaining experience that will enhance life” whether you’re Muslim, or not.

Alchemiya presents itself as a Netflix-like video-on-demand television channel with lifestyle content offering viewers a wide range of genres – from comedy to factual, feature films to fashion – Their website states: “at the heart of our work is content, its ability to touch people and create transformation”.

Akhtar says many of these programs already exist, they just haven’t found worldwide exposure. “Alchemiya will be working with a global network of producers, getting the best quality programmes from around the world and commissioning those we can’t find elsewhere.”

For Navid Akhtar it has been a four year journey of research, but Alchemiya is now in its crowdfunding stage to finance the channel’s launch “with money that has come from our supporters because we wish to remain editorially independent”. They are looking for 10.000 founder subscribers at a discounted rate of £100 for two years access, to be able to launch their full service. When they reach 3000 subscribers they will launch the Beta version of what will be the first online Muslim television.

Alchemiya has already had subscriptions from diverse countries such as Japan, Australia, Canada and Malaysia. “We are on target”, Akhtar and the Alchemiya team are busy building the website and gathering content.

As a preview of their work and to celebrate their crowdfunding appeal Alchemiya supported the production of American Muslim hip-hop artist Baraka Blue’s latest music video: Love & Light. The lyrics are a western Poet’s interpretation of a traditional Islamic prayer.

With quality, beauty and spirituality as their main aim, Alchemiya’s CFO David Horne seeks to “provide the Muslim community with a reason to celebrate and the non-Muslims with quality entertainment for the soul.”