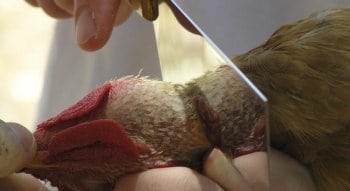 Amid increasing campaigns against Halal meat in the UK, the British government said it had “no intention” to ban the religious slaughtering of animals for Muslims and Jews, despite a petition by the BVA was behind that attracted more than 100,000 backers. There was also a counter petition which gained over 140,000 signatures in 10 days to Protect Religious Slaughter in the UK and EU.

“There are strict rules that govern the slaughter of animals in England which include additional conditions for religious slaughter and these remain unchanged,” a spokeswoman for the Department for the Environment, Food and Rural Affairs (Defra). “The Government has no intention of banning religious slaughter.”

“The Government would prefer animals to be stunned before slaughter, but we respect the rights of Jewish and Muslim communities to eat meat in accordance with their beliefs,” the Defra spokeswoman said.  “Existing rules require that where stunning is used it must be sufficient to make the animal unconscious and insensible to pain without causing unnecessary pain, suffering or distress.”

In reaction to the minister’s the rejection, vets chief and president of British Veterinary Association (BVA) John Blackwell said that the ministers can’t “ignore the strength of public feeling” and vowed to press for a fresh debate on the issue.

“BVA has long argued that all animals should be stunned before slaughter to render them insensible to pain and we are delighted that the British public has got so firmly behind our campaign,” Blackwell said.

“Consumers value the high welfare of British produce and care deeply about the provenance of their food,” he said.

“But under the current legislation meat from non-stun slaughter can end up in the food chain unlabeled as such, which is completely unacceptable,” he added.

The 2013 Food Standards Agency animal welfare survey in Great Britain found that based on assessments by Official Veterinarians (OVs) during the week of 16 to 22 September 2013 to provide a representative sample of welfare practices at 232 red meat slaughterhouses:

– 75% of Halal cattle slaughter was pre-stunned;

– 82% of Halal poultry slaughter was pre-stunned;

– 63% of Halal sheep/goat slaughter was pre-stunned;

“The BVA is negligent in its duty to protect animals. If there is a genuine interest in improving animal welfare at time of slaughter, we need to look at many areas like abattoir practices, CCTV and mis-stunning during slaughter. The fixation with religious slaughter beggar’s belief,” said. Schechita UK’s director, Shimon Cohen.

If BVA’s agenda was Animal Welfare at the time of slaughter then why was their no mention about Gas Stunning? They have accepted Gas Stunning where it takes 5/7 minutes for the chicken to suffocate and for Pigs they fear worse 7/9 minutes to suffocate them. This process has been readily accept by RSPCA as a humane method to slaughter.

The Muslim and Jewish representatives responded to calls by animal welfare activists for clearer food labeling guidelines on stunned and non-stunned slaughter saying, “They [consumers] should also be told the method of slaughter: captive bolt shooting, gassing, electrocution, drowning, trapping, clubbing or any of the other approved methods. The reason not to fully label all products would highlight the problem of mis-stunning, where some animals are actually not stunned before slaughter, and gassing.

Comprehensive labeling should be supported by faith communities and animal welfare groups alike, it would offer all consumers genuine choice, whether they are motivated by animal welfare, religious observance, or even intolerance of anyone who looks or worships differently to them.

One Out of Five Campaign

In response to this outcome the Association of Non Stun Abbatoirs (ANSA) has created the One Out of Five Campaign to highlight to the British Muslim community in UK  that 80% of the halal meat and poultry they are consuming is pre-stunned according to the British Veterinary Association (BVA). This was reaffirmed last week in the House of Commons debate where the BVA was pushing to Ban non Halal slaughter.

In his statement, BVA president John Blackwell insists the campaign to ban non stun slaughter is all about animal welfare, but where does he discuss in is his animal welfare campaigning about gassing where it takes up to 7/9 minutes for pigs and chickens to suffocate, or in the poultry industry where every week in the UK 10 million male chicks are ground ALIVE in a grinding machine, ANSA questions.

An Open Letter written to Robert Hargreaves, President of the British Veterinary Association, in August 2014 by the Head of Certification, Halal Authority Board, listed 10 areas which highlight blatant cruelty perpetrated on animals in the UK and was never responded to.

One in Five Campaign aims to raise awareness to consumers by asking: Are you the 1 out of 5 eating halal non stun meat or do you want to be the 4 out of 5?  It is to encourage them to write to halal producers to enforce clear and honest labeling, so informed choices can be made.

This means advising the appropriate Agencies.  ANSA says that muslims don’t want a ‘funny label, with lots of colors or company logos, just the word stunned or non stunned added all labels with halal claims’ to help the consumer muslim and non muslim consumer to make their choice.