Business has traditionally been seen as a male dominated world. However, the UK is currently experiencing a shift in a niche area of the entrepreneurial world.

Say hello to a rising crop of female Muslim mumpreneurs who are shattering stereotypes and inspiring confidence in fellow women to start new businesses.

It is estimated that females currently form 50% of start-ups from the Muslim community – with this figure set to rise further in the future.

Next weekend, Manchester will be home to a wide range of female exhibitors showcasing their businesses to an estimated crowd of over 10,000 at the Muslim Lifestyle Expo 2016 – the UK’s biggest showcase of the trillion-dollar global Muslim consumer industry.

“The stereotype of Muslim women stuck in the kitchen and carrying out household chores are long gone,” said Tahir Mirza, founder of next weekend’s Expo.

“When we announced this year’s dates for MLE2016, we were inundated with enquiries from Muslim women from not only the UK but across the world wanting to exhibit.

“It is refreshing to see how these mumpreneurs are shattering the myth that Muslim women are held back and oppressed.

“It’s a booming industry and these mumpreneurs are working hard in their 9-5 jobs and in their spare time are setting up successful businesses in a wide range of sectors.

“According to our research, Muslim women represent 50% of the start-up business community and this figure is set to grow further over the next few years.

“Furthermore, the biggest inspiration for these mumpreneurs is other Muslim females. Who better than up-and-coming female entrepreneurs with similar cultures and backgrounds to have as role models?”

The Muslim consumer market is now one of the biggest in the world growing at nearly double the rate of the global economy.

According to a report by Thomson Reuters, the Muslim consumer spending on food and lifestyle products and services has been estimated at $1.8 trillion in 2014 and projected to reach $2.6 trillion in 2020.

To highlight the growth and success of Muslim businesswomen, the expo will host, as part of its MLE Connect seminar sessions, a panel discussion titled ‘The Rise of the Muslim Mumpreneur’ featuring international make-up artist Zukreat Nazar and Sabiha Ansari, co-founder and VP of the American Muslim Consumer Consortium.

One mumpreneur who will be exhibiting next weekend is mother-of-two Shahin Hussain from Watford who started The Mocktail Company just three months ago.

The business, which makes non-alcoholic mocktails, has already sold 19,000 bottles and is stocked in over 50 outlets. It is now looking to launch two new flavours by the end of the year, alongside its debut product – a non-alcoholic mojito called Nojito.

“I noticed that there was huge gap in the market and got the inspiration from there.” says Shahin.

“I had no experience of manufacturing at all but we started to do some taste tests and within a few weeks we were up and running.

“I have two small children, so it does get difficult to juggle everything but I’ve managed so far and I’m looking forward to promoting the Nojito at MLE next week.”

Thought leaders and established entrepreneurs will highlight the growth of the Muslim lifestyle markets and share business insights at the MLE Connect seminars.

“The traditional working class Muslim woman doesn’t often get the support to start a business and they don’t use traditional crowdfunding methods” adds Tahir Mirza.

“It is one of the main reasons why we created the Muslim Lifestyle Expo 2016 to allow Muslim female entrepreneurs the platform and confidence to showcase their products, network and connect with the wider business world.”

MLE2016 has attracted Turkish Airlines as the main sponsor and Human Appeal International as the chosen Charity Partner. MLE will also partner with brands such as restaurant chain MyLahore, AHDB who work with the meat industry and global organisations such as the Islamic Fashion & Design Council.

Selling 19,000 bottles in just over three months is no mean feat, but mother-of-two Shahin Hussain has only just started.

Like many successful businesses, Shahin Hussain, was inspired to start The Mocktail Company after noticing a gap in the market.

“We wanted to create a premium drink that would be a viable alternative to drinks such as J20, Appetiser and Schloer.

“Within a few weeks of the idea we had launched the Nojito in a nicely designed bottle and the response has been phenomenal.”

Alongside running a business, Shahin is mother to two young children – Aydan (4) and Sofia (2).

Over the next few months, Shahin is planning to launch two new flavours including a strawberry daiquiri inspired mocktail called the Strawberry Mockiri.

The team behind the Muslim Lifestyle Expo also have their very own Mumpreneur – Shabana Mirza.

Shabana is the wife of CEO Tahir Mirza has been an integral part of the pioneering Expo since its inception in 2013 taking this startup into international markets and being a full time mum with two young children.

In the space of 18 months the couple and the team behind the Expo have delivered two international class events and won an award for their inaugural 2015 event.

“When I first mentioned the idea of MLE to Tahir, I never thought it would be this successful,” says Shabana. “Organising MLE is daunting and stressful, but I have enjoyed it, learned a great deal and seen first hand the key role women are playing in Muslim businesses. 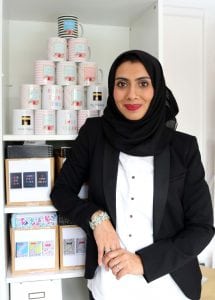 Sabah Nazir is seen by many as an inspiration to female Muslim entrepreneurs – hardly surprising given that she has been in business for over a decade.

She started her greeting card company back in 2004 designing and producing mainstream greeting cards. However, the turning point came in 2011 after she realised the market was not catering for the modern Muslim consumer.

“I redesigned all my products around the Muslim market, which gradually took over my portfolio and as they say, the rest is history,” she says.

“I was determined to create a platform where we became that aspirational lifestyle brand for young Muslim consumers to meet their lifestyle and aspirations in accordance with their faith.”

After initially starting with a small portfolio of 60 greeting cards Sabah now has a portfolio of over 300 Islamic design-led products from greeting cards to notebooks, Eid bunting, banners and balloons, colour in sets, pencil cases, tote bags, mugs to art prints.

As well as juggling her business Sabah mum to four children from ages nine to 19.

Islamic Moments now have around 300 stockists selling in over 20 countries worldwide.

The “Toys ‘R’ Us for the Muslim community”, says Nazia Nasreen, CEO of Ibraheem Toy House when asked to describe her business.

Ibraheem Toy House is the UK’s first online Islamic toy store founded by the mother of two in 2014.

In just two years, the number of products it offers has grown from four to more than 200 from 30 different suppliers from around the world selling educational toys and books, including dolls in hijabs and colourful prayer mats.

“I wanted to teach Islam in a fun way to my children and there was nothing available,” says Nazia who still works part-tie during the week.

“The idea for the business just came from there and even though it was daunting the support of family and friends pushed me to go for it.”

Nazia now plans to design her own product range in the near future with plans for further expansion.

“If you have an idea and you have done the correct research, you should just go for it,” adds Nazia. “That’s my advice to anyone wanting to start their own business.