The word Qurbani is an urdu word meaning ‘sacrifice’

It is a way for individual Muslims to approach the level of submission to God shown by the Prophet Ibrahim (Abraham) (S.A) at the moment atop Mount Arafat when he was readying to sacrifice his beloved son – sacrificing that which is nearest and dearest to oneself.

The Prophet Ibrahim (S.A) was willing to give up that which was precious to him beyond measure, that which could not be replaced, that which had come into his life despite so many in the world around him telling him it would never happen at his age.

The act of Qurbani today is at the heart of the Hajj Eid al Adha and is a deeply meaningful and important event. Those who give Qurbani are demonstrating their submission to Allah’s (SWT) will, just as Prophet Ibrahim (S.A.) did before them. 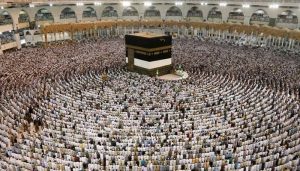 Qurbani, or Udhiyah as is the Arabic term, is a significant religious practice in Islam performed all over the world by billions of Muslims on Eid-ul-Adha and the two days following it during Hajj time. It is the practice of slaughtering an animal, usually a sheep, goat or a cow, as an offering to God.

As mentioned earlier, this is a very important and emotional religious practice. Therefore, careful attention should be given to every detail no matter how big or small so as to see to it that Qurbani is conducted properly and in full accordance with the rules of Islam.

First and foremost; eligibility. Unlike prayer (Salat) that is compulsory for every Muslim, Udhiya demands that certain criteria must be met in order for the individual to be eligible to perform Qurbani. Any sane adult, Muslim male or female, who possesses the Nisab (de-minimus) amount for Zakat must also perform the duty of Udhiya. In short, if they are eligible to pay Zakat, they must also perform Qurbani for themself.

Secondly, the timing of Qurbani. This is very important as there are very strict and specific guidelines as to the timing of this extremely important Islamic practice. Udhiya can only be performed after the Eid-ul-Adha prayers from the 10th of Zul-Hijja to the 12th of Zul-Hijja (the last month of the Islamic Calendar as determined by moon-sighting).

This means Muslims have three days to perform this ritual but the first day is not fixed until the moon is sighted. If the slaughter is performed before the allotted time, it is ineligible and must be repeated. If performed after the time has passed, then Qurbani was not properly conducted and will not be accepted.

The health and condition of the animal is also very important. The objective is to sacrifice the best you can afford. Animals that are weak, blind, physically disabled, or those who are young, have broken horns or no teeth are ineligible. Regarding the types of animals that can be used for Qurbani, people generally opt for a ram sheep. However goat, cow, bull, buffalo or camel are also acceptable.

Similar to Halal meat, saying the Takbeer at the time of sacrifice is paramount to ensuring a successful and acceptable Qurbani. Bismillahi Allahu Akbar (in the name of God, God is Great) are the correct words to say at that moment.

Which Animals Can Be Sacrificed?

The animals which are eligible for Qurbani are: Sheep and goats at least one year in age (equivalent to one person’s Qurbani).

In addition, all animals must be healthy and free of disease, including the following conditions:

How Should Qurbani Animals Be Sacrificed?

[The value of the skin should be given to charity.]

[Traditionally the meat should be portioned in three with one-third going to charity, one third for friends, family & neighbours and one-third retained.]