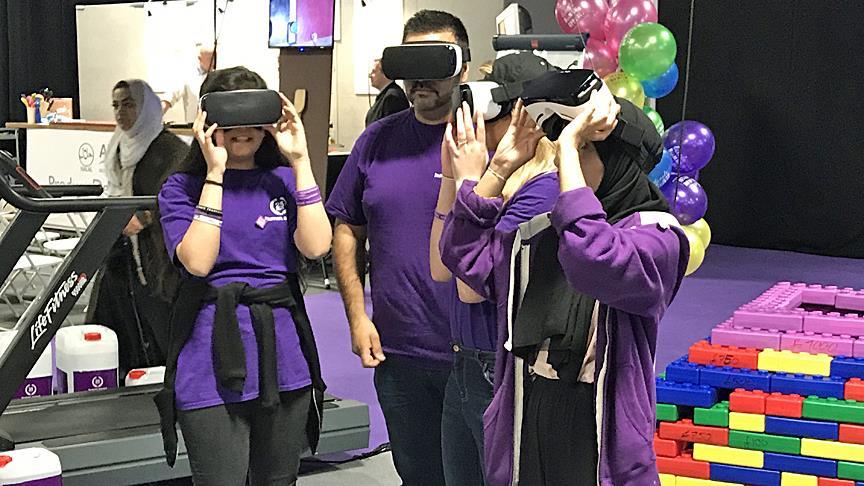 The latest lifestyle trends for the U.K.’s Muslims came to center stage in northern Manchester city Saturday with an annual event that aims to attract around 15,000 visitors.

Rauf Mirza, one of the organizers of Muslim Lifestyle Expo (MLE), said the event aims to “project British Muslim community a positive light”.

Speaking with Anadolu Agency, Mirza said they, as the MLE, “have tried for three years to project a more positive image about British Muslims by all moderate lifestyle aspects people enjoy”.

“We have businesses participating from all across the U.K.”

Mirza expressed satisfaction with the participants’ interest, adding that they have invited people from non-Muslim backgrounds as well to enjoy the richness of Islamic culture.

In the event, the Greater Manchester Police, Royal Air Force and Home Office opened their stands for recruitment; they also explained their project to community members.

In front of her artwork exhibited on white panels, artist Ranaaz Shahid spoke about how she was inspired by Islam itself while creating beautiful calligraphy portraits.

“I used Islamic geometry patterns. I see a lot of non-Muslims in my trips. There are people who want to learn about our culture, our religion and where all these Islamic geometry started from,” Shadid said.

The event brought together many Muslim entrepreneurs and communities from across the country.

Police officer A. Sardar explained the purpose of a stand by Greater Manchester Police force at the event.

“We have 120 Muslim officers within the Greater Manchester Police force,” he said, adding that they want to see the numbers go up.

A charity stand gave people an opportunity to see the full-scale destruction and poor living conditions in the Palestinian city of Gaza through 3D virtual goggles.

Sara, one of the visitors at the expo, described the scene brought to her via latest technology used by Human Appeal.

She said she can see destroyed buildings and children with worn-out clothes in Gaza.

Books by Muslim authors and non-Muslim writers on Islam were also on display for visitors.

War and Peace In Islam, a book by three authors, including Turkish presidential spokesman Ibrahim Kalin and other books were distributed at one of the book stalls at the event.

People listened to a beautiful performance from a Birmingham-based Nasheed and Qasedah group, and they also enjoyed a fashion show with models displaying the latest Muslim women fashion houses too on the first day of the MLE2017.

The expo is offering a variety of themes and activities, including live cooking demonstrations and celebrity chefs and aiming to keep the kids happy with plenty of activities.

The U.K.’s first Muslim lifestyle event was first launched in 2015.

The two-day event will last until Sunday evening.