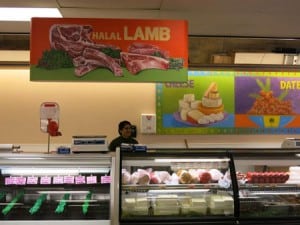 COLORADO – A mix of cultural and economic factors pushed lamb off the American dinner table in recent years, but an emerging new customer base from within the Muslim and Latino communities is now being seen as the “saviors” of the industry.

“Marketing it towards the Muslim and Mexican communities, that’s definitely the way to do it, if you’re gonna want to sell it in any real volume,” Rancher and Iraq War veteran serving in the Marines, A.J. Nelson, who helps run Cactus Hill Ranch near Windsor, Colorado, told Community Radio for North Colorado on Monday, April 20.Nelson is among a growing number of Colorado feedlot owners who are eyeing Muslim and Latino consumers to revive the industry. Replaced by meat from Australia or New Zealand, the American lamb market is losing ground in its homeland.

Four firms slaughter about 65% of U.S. lambs.  Over 80% of lambs are slaughtered in plants with annual capacities that exceed 100,000 head.  Colorado, Iowa, Michigan, and New Jersey are major sheep and lamb processing states, according to a report published for Ag Marketing Resource Center (AgMRC) by Gary Brester, professor, Department of Agricultural Economics, Montana State University.

While the average American eats 50 pounds of beef and 90 pounds of chicken every year, he or she consumes roughly a half-pound of lamb in the same period.

“The grandmother who overcooked it and it was tough and brown and dull and gamey. They put mint jelly all over it. We like to say our lamb today isn’t really your grandfather’s lamb.”

According to the US Department of Agriculture’s Agricultural Marketing Research Center, “the majority of U.S. residents do not consume any lamb.”

Many Colorado ranchers and retailers believe that most lamb meat ends up in halal slaughterhouses.

The concept of halal, — meaning permissible in Arabic — has traditionally been applied to food.

Halal food is consumed not only by 1.5 billion Muslims around the world, but also by at least 500 million non-Muslims.

To tap into the thriving industry among Muslims and Latinos, ranchers and retailers are advised to adopt new marketing strategies.

“What we’re really starting to see is a new generation of younger sheep ranchers who are coming in and they’re very eager to better understand the market and really bring things to market that are going to be applicable to different consumer segments,” Anders Hemphill, vice president of marketing with Superior Farms, one of country’s largest lamb processors, said.

In a bid to reach out to a more diverse community, the American Lamb Board, is now giving ranchers and retailers lists of “dos and don’ts” when marketing lamb to ethnic consumers.

The list cautioned lamb producers against showing women in hijabs or men in sombreros on packaging. It also suggested rolling out a website specifically targeted at the growing group of consumers.

“Good meat on them. Good size. 100 pounds or less, that’s what the ethnic market wants, which is different from what the American likes. They like them bigger, more fat on them.”

Being a lamb broker for more than 16 years, Himat now has many competitors of the same faith.

According to a report published by the author of Sheep 101, Susan Schoenian, a Sheep & Goat Specialist at the University of Maryland’s Western Maryland Research & Education Center, lamb is a prime source of high-quality protein, vitamins, and minerals.

As with other red meats, its protein is nutritionally complete, with all eight essential amino acids in the proper ratios. A 3-ounce serving of lamb provides 43 percent of an adult male’s recommended daily allowance (RDA) of protein. Lamb is high in B vitamins, zinc, and iron. Red meats, especially lamb and beef, are amongst the best sources of absorbable iron. For those watching their carbohydrate intake, lamb as zero carbs.

Although there are no official figures, the United States is believed to be home to between 6-8 million Muslims. A Pew Research Center study, Public Remains Conflicted Over Islam, has revealed that the majority of Americans know very little about Muslims and their faith.

Another Economist/YouGov poll found that a large majority of Americans believe that US Muslims are victims of discrimination amid recent attacks against the community.