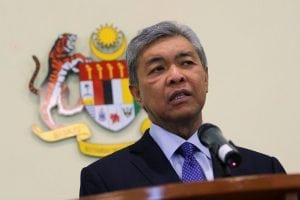 Zahid said working with Yunnan and Xinjiang would also help Malaysia get a bite of the US$1.1 trillion global halal market as the products could be marketed internationally.
He said the halal certificate by the Islamic Development Department (Jakim) would also be “internationalised” this way, though it is already recognised by several countries, including South Korea and Japan, the latter of which needs certification for food provided to athletes from Muslim countries as it is set to host the next Olympics.

Zahid said a Jakim laboratory would be set up in Yunnan, though it was still too early to say where it would be located.

On connectivity, he said Yunnan officials were keen to look into a possible high-speed rail line between Bangkok and Kunming. This would connect several Asea countries with the HSR line between Singapore and Kuala Lumpur, the proposed line between KL and Bangkok, and now a possible Bangkok-Kunming line.
Zahid said such connectivity would make it possible for passengers to get on in Singapore and make it all the way to Beijing as there is currently a HSR link between Kunming and China’s capital.