New CFIA rules require halal label include name of organization or individual who certified the product.

After years of complaints from the Muslim community about companies slapping the term “halal” on food that is not, new labelling regulations come into effect today across the country.

Under the new rules, the Canadian Food Inspection Agency requires that any food labelled halal has to have been certified by an organization that ensures it does, indeed, meet Muslim dietary requirements.

For animal products, those religious requirements include blessing each animal before slaughtering it by hand.

“As of April 4, all halal claims on food labels, packaging and advertising materials will need to be accompanied by the name of the organization or person that certified it as halal,” the CFIA said in a notice to the food industry.

Prior to the new rules, halal labels did not have to specify the certifying organization.

‘There’s no unifying certifying body that certifies the certifiers. So, anyone can become a certifier.’  – Salima Jivraj, founder of the Halal Food Fest Toronto

The new federal regulations do not specify which organizations are qualified to certify food as halal, and the CFIA does not oversee such organizations. Nor does the agency spell out any criteria for what constitutes halal, leaving that determination up to community and religious organizations.

She says while the labelling rules are needed to deter fraudulent halal products, they don’t go far enough.

“The issue is, there’s no unifying certifying body that certifies the certifiers,” said Jivraj, who also edits the website halafoodie.ca. “So, anyone can become a certifier. There’s no accreditation. That’s really the missing link.”

The term ‘halal’ means ‘permissible’ in Arabic and refers to all areas of life governed by Islamic laws. The criteria for what makes certain types of food halal varies and is sometimes open to interpretation. Iqbal H

alal Foods, above, in Toronto’s Thorncliffe Park neighbourhood is one of Canada’s largest South Asian grocery stores and specializes in halal food. (CBC/Radio-Canada)

The halal regulation is very similar to one already in place for kosher food. Both are written in a way that ensures the government’s food inspection agency doesn’t need to get involved in sometimes touchy religious definitions of what constitutes kosher and halal food.

Consumers can, however, lodge a complaint with the CFIA if they suspect that a company has labelled a product halal without having it certified.

“That would be bad because it’s a question of your faith,” said Salim Dalal. “If you end up eating meat that wasn’t halal, depending upon how strongly you feel about it, it can have a lot of ramifications.” 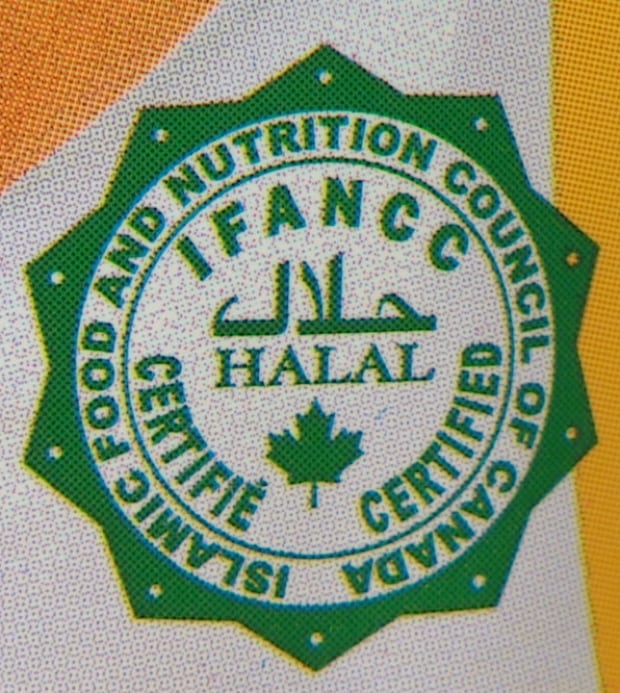 Canada has more than a dozen organizations that certify that a product conforms to the requirements of halal. One of the biggest is the Islamic Food and Nutrition Council of Canada, based in Mississauga, Ont., west of Toronto. (CBC/Radio-Canada)

The term “halal” means “permissible” in Arabic and refers to all areas of life governed by Islamic laws. Most food is automatically halal, but for meat to be halal, each animal has to be blessed before slaughtering and all slaughtering has to be done in a certain way by hand.

There are more than a dozen halal certifying organizations in Canada that verify whether or not producers are following halal practices. The two largest are the Islamic Food and Nutrition Council of Canada and the Halal Monitoring Authority, both based in the Greater Toronto Area.

Since the new regulations don’t actually regulate the certifying organizations, some people in the Muslim community are concerned that the new system could still be abused by fly-by-night certifiers.

Omar Subedar, a Toronto-area imam who works with the Halal Monitoring Authority, is concerned that the new regulations still leave too much room for abuse. (CBC)

“Since the organizations and the bodies are not going to be regulated, that is going to be a problem,” said Toronto-area imam Omar Subedar, who works with the Halal Monitoring Authority. “But the good thing is that now the community has a reference point. They can go and ask, ‘Who is it that certifies it? What is your criteria?'”

Haider Kattack is on the board of Canada’s other big halal certifying organization, the Islamic Food and Nutrition Council of Canada. He also expects the community and food companies to police the process and make sure the certifying bodies are legitimate.

The term halal can apply to different kinds of food, including yogurt. Religous communities do not always agree on the necessary criteria for what constitutes halal. (CBC/Radio-Canada)

“The consumers are the ones who will decide,” he said. “But the food industry, actually, they look for the certification body with many years of experience in the halal industry so they will definitely do a bit of research before they contact any certification body.”

The government estimates the annual market for halal food is more than $1 billion.