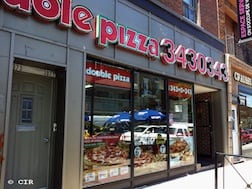 It is said that the face of cities are reflected in their streets. Wellington is a busy, commercial avenue running through the borough of Verdun. Its face is changing at the same pace as increasingly diverse Montreal. The pattern seems to be traditionally Quebec-owned businesses being taken over by Muslim  entrepreneurs.

With a growing Muslim population moving to Verdun, Muslims entrepreneurs see opportunities to  have a business that attracts both halal-eaters and non-halal-eaters.

Double Pizza is one such example. The new eatery, opened just a few months ago, is  run by a couple of young Iranians and brings a new presence in the otherwise traditionally white-Quebecer businesses.

The food on the menu is varied,  good and portions are generous. Very importantly, the place is clean and well lit, unlike some “traditional” pizza places which are almost always dirty or simply filthy.

Of course, they do not serve pork, only beef and chicken.

The beef is not halal, but the chicken is, as the supplier is Iranian. Also, the pepperoni is halal. This can be an issue for those who are fans of genuine pepperoni. The spicy Italian-American variety of salami (a dry sausage) is usually made from cured pork and beef. Some add poultry, but this must be mentioned on the label.

Do Montrealers who eat there know that they eat halal chicken and pepperoni?  Do they care? Probably not.

A few buildings farther, a pastry shop has opened. It is, of course, a Muslim owned place where they speak Arabic with their Arabic speaking clientele.

What will happen with this street in winter, when Christmas decorations are hung, if more Muslim businesses will open?

Will they ask for Christmas to be banned from rue Wellington? Will rue Wellington change so much to resemble a street in the Middle East?

It happened in Europe.