The third Global Halal Congress will take place in Opatija in November with over 1,000 participants from all over the world, representatives of the Halal Certification Centre of the Islamic Community in Croatia announced at a round table on Tuesday. 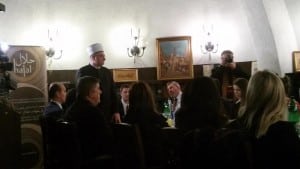 The round table called “Halal tourism market, growth and development prospects” was held at the Islamic Centre Zagreb for hoteliers, representatives of local tourist boards, travel agencies, manufacturers, the ministries of tourism and foreign affairs, the Croatian Chamber of Commerce, and halal certification centres of Slovenia and Bosnia and Herzegovina.

The head of the Islamic Community in Croatia, Mufti Aziz Hasanovic, said the three-day congress would take place in the year marking the centenary of the recognition of Islam in Croatia. “The celebration of that great anniversary, about which only Austria can boast too, will take place on April 27, and the Global Halal Congress in Opatija in November will additionally promote Croatia, which has big potential to draw closer, in terms of exports and notably tourism, to the markets where that certificate is important in the choice of products and services.”

Croatia introduced halal certification in 2007 and the Halal Certification Centre was established in 2010, its head, Aldin Dugonjic, said, adding that 61 manufacturers, 23 hotels and restaurants and seven travel agencies had the certificate

The Centre’s ultimate goal is to attract investors from the Muslim world and encourage them to invest in tourism and other sectors in Croatia, Dugonjic said, adding that only Turkey was investing for now, unlike rich Arab states of the Persian Gulf.

Ivo Basic, an adviser to the tourism minister, said the ministry supported certification and encouraged everything that increased the competitiveness of Croatian tourism.