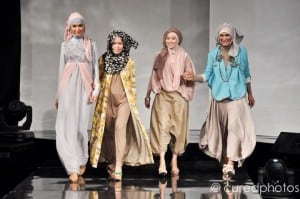 Islamic clothes, fashion and design market is an emerging industry with huge potential, and is one of the core sectors of the Islamic economy.

Dubai: There is a huge gap in the global Islamic clothes, fashion and design market in the absence of major Islamic brands capable of meeting the requirements of the Muslim population, especially women, new research has found.

A research note by the Dubai Chamber of Commerce and Industry, based on a study by Thomson Reuters, said that the Islamic clothes, fashion and design market is an emerging industry with huge potential, and is one of the core sectors of the Islamic economy. The findings of the report are therefore of significant interest to the market, especially since the 10th World Islamic Economy Forum is scheduled to be organised in Dubai from October 28 to 30 by the WIEF Foundation and the Dubai Chamber.

Abdul Rahman Saif Al Ghurair, chairman of the Dubai Chamber, said: “While the 1.6 billion Muslims around the world represent about 23 per cent of the world’s total population, the market does not have any prominent Muslim clothing brand. As a result, the Muslim population is not yet catered for in terms of their clothes and fashion aspirations. The gap in the market is currently addressed by the main players of the global clothes fashion industry, who are not equipped to fully attend to the requirements of the Islamic customer base.”

Al Ghurair added: “The research note findings are of relevance to Dubai considering that it aims to become a global centre for Islamic fashion and design as a key pillar of the Dubai Capital of Islamic Economy initiative launched in 2013. The lack of a global Islamic clothing brand presents a unique opportunity for local fashion designers and companies to leverage Dubai’s status as a trendsetting centre and make use of its successful retail sector to establish global Islamic clothing brands.”

Currently, no single local Muslim brand dominates the market. However, within the 57 countries that form the Organisation of Islamic Cooperation countries, local clothing companies have managed to establish their presence, producing local dresses based on local cultural preferences.

The gap in the international Islamic clothes, fashion and design market is significant in the light of the Dubai Chamber report finding that the global Muslim population spent $224 billion on clothes in 2012, accounting for about 10.6 per cent of the global spending in the garments sector. Globally, spending on clothing and footwear reached about $2.1 trillion in 2012 and this figure is expected to reach $2.9 trillion by 2018.

Spending by the Muslim population is expected to grow from $224 billion in 2012 to $322 billion by 2018, comprising about 11.2 per cent of the global spending, the report states. Among the Muslim majority countries, Turkey recorded the highest spending on clothing in 2012 worth about $24.9 billion, followed by Iran with $20.5 billion. Other prominent nations in this group are Indonesia with $16.8 billion, Egypt $16.2 billion, Saudi Arabia $15.3 billion, Pakistan $14.4 billion and the UAE with $10.2 billion.