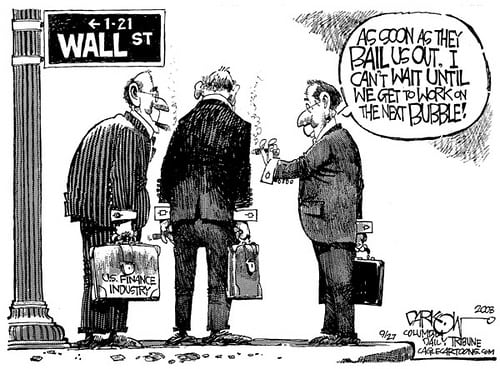 23 May 2013, is the annual general meeting (AGM) of financial speculator Goldman Sachs, the archetypal villain of the global economic meltdown, bailed out by US taxpayers to the tune of $5.5bn. Perhaps they’ll hand out last year’s Community Impact report, which shows how they’ve tried to redeem themselves with charity, like serving up almost 30,000 meals and preparing about 250,000 others in community projects in the US and around the world.

The irony, of course, is that while they’re serving up a few meals, their core business is virtually starving people at the same time. In 2012, the US investment bank made an estimated $400m from speculating on food.

The World Bank estimated in 2010 that 44 million people were pushed into poverty because of high food prices, and that speculation is one of the main causes.

Since Goldman led the drive to deregulate commodity markets in the 1990s, after constraints were imposed following the 1930s Wall Street crash, they’ve been at the vanguard of creating and promoting complex commodity instruments, from which they’ve raked in huge profits. Wallace Turbeville, a former vice president and the inventor of commodity index funds, has been outing the company’s methods.

In 1996, speculators held 12% of the positions on the Chicago wheat market, with most of the market being made up of the legitimate users of food – from farmers to producers. But the legitimate hedging element of commodity markets has virtually disappeared in the intervening years. By 2011, pure speculators made up a staggering 61% of the market. Of course, Goldman Sachs isn’t the only player, but it is certainly the largest.

For several years, it was hotly debated whether speculation in food commodities drives up prices. But the evidence now firmly says it does, and that there’s little correlation between rising prices and actual supply and demand. There are now well over 100 studies which agree (pdf), from sources as varied and valuable as Harvard University, the Food and Agricultural Organisation and the United Nations.

The knock-on effect of increased speculation has meant price spikes are now more and more common. In November 2012, the World Bank declared a new era of food price volatility.

While regulators play catch-up on both sides of the Atlantic, financial lobbyists are doing their utmost to block progress. The Dodd Frank Act, passed in 2010, imposed limits on speculation; but industry lobbyists are fighting at every pass.

In September last year, just before new rules would have come into effect, a Washington DC court ruled in favour of the International Swaps and Derivatives Association and the Financial Markets Association, which brought forward a claim that the rules were drafted fautily. An appeal is now pending, putting any effective regulation way out into the long grass.

Meanwhile, across the Atlantic, as Brussels tries to bring forward similarly progressive regulation, the tentacles of Goldman’s influence are everywhere. In the UK, Goldman Sachs gave £8.8m ($13.4m) to political parties. The UK is the primary opponent blocking Brussels-regulation against commodity speculation.

Members of the European parliament on the economics and monetary committee met with representatives of Goldman Sachs, its lobby groups and PR companies nine times in the first six months of 2010 alone – the year regulation was drafted. Meanwhile, Goldman Sachs is represented on 16 industry groups that were invited to join a “special working group” to look at financial reforms for the European Commission.

Charity may be alive and well, but until the regulators stand up to its influence, Goldman Sachs and its financial sector cohorts are still able to give with one hand while taking significantly more with the other.