By Simeon Kerr in Dubai 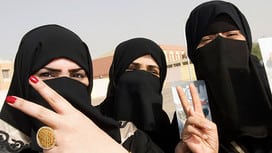 Muslim women were told for years that wearing nail polish would negate wudu ablutions before prayer. Many therefore refrained from painting their nails.

So, when Polish cosmetics group Inglot launched a permeable polish that allowed water to reach the skin, many women seized on the product as a means to marry their religious obligations and grooming routine.

“The nail polish has been a huge craze,” says Tima Ouzden, a Dubai-based creative director who has been sending the product to friends in Moscow. “Practising Muslims are very excited about it and buying it, but others say, ‘no, it is not halal.’”

The hype surrounding permeable nail polish has raised the profile of halal make-up, a fast-growing consumer segment among Muslims in Asia and the west, which is also spreading quickly to the Middle East.

For some, sharia-compliant beautification is a contradiction in terms, sitting at odds with the Islamic precept of modesty. Others believe these products are a cynical marketing ploy preying on Muslim women’s concerns.

But many devout Muslims are increasingly looking to use such products in line with Islamic and other ethical considerations.

“Halal products eliminate ethical concerns that Muslim women have regarding using products that are at odds with their belief system, and do away with more practical concerns of praying with make-up on,” says Isabelle Aoun, a doctoral candidate at the Grenoble Ecole de Management in France.

The halal cosmetics market is estimated to range between $5bn-14bn in annual sales, growing at around 20 per cent a year, according to advertising company JWT MENA, part of a broader market for religious-compliant products worth more than $2.1tn.

“It’s a great time for marketers to be paying attention to their relationships with Muslim consumers,” says Mennah Ibrahim, head of brand intelligence at advertising company JWT MENA.

Demand is growing among the large, growing young population of Muslims across the world as religious compliance intersects with ethical concerns.

Products should not contain alcohol, pork or by-products of animals not slaughtered according to Islamic tradition.

The halal industry also crosses over to wider audiences, such as those who share concerns about animal testing or unnatural substances.

As such, the rise of halal cosmetics falls into one of the Islamic consumer trends being led by what JWT’s Ms Ibrahim describes as “New Age Muslims” or “Muslim futurists”: well-heeled, tech-savvy Muslims who use their religion as a tool for positive change.

“They believe in an Islam that is flexible, balancing their sense of self within the realms of a Muslim society,” says Ms Ibrahim. “And they are already seeking out products and services that layer-in Muslim values into otherwise impractical lifestyle amenities.”

But accreditation remains an impediment to the industry’s development.

Malaysia’s Islamic development department certifies halal cosmetics on request, but has not made the process mandatory. Dubai, as part of its attempt to place itself at the centre of the “Islamic economy”, is launching a committee to unify certification of Islamic products beyond the well-established world of food items.

Some major manufacturers are nonetheless dipping their toes into what could become a lucrative market.

Ms Aoun, whose research focuses on branding in Muslim consumer markets, points to examples such as Colgate-Palmolive’s halal toothpaste and Sunsilk’s Clean & Fresh shampoo, designed for women who veil their hair.

“It’s a burgeoning market, led by niche players,” says Ms Aoun. “And this is where the opportunity lies, to open up an underserved segment.”