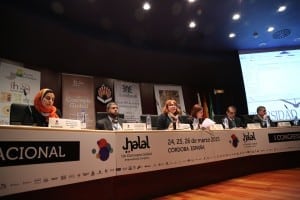 CORDOBA, Spain, March 25, 2015. The boom of Halal tourism, the Spanish historical heritage wasted potential or an hotel reorganization to receive Muslims guests are just some of the topics discussed on Tuesday at the “Halal, A Global Concept” Congress that Cordoba is hosting for three days.

In Spain there is only one hotel with a Halal certification, the Alanda Hotel Marbella (in Malaga). Its restructuring was not carried out without difficulty: beyond transforming their kitchens, finding certified suppliers or adapting sport facilities, one of its biggest challenges has been the retraining of his human capital.

“It takes many years of experience to educate the staff in the Halal attention when it comes from a traditional hotel. However, our teams today are our greatest assets”, stated CEO Fernando Portal. Today the Alanda combines Muslim tourists with regular customers that, after some initial doubts, have now welcomed the new concept and started consume non alcoholic beverages and enjoy Halal cosmetics in their bathrooms.

Traditionally, Spain is not one of the countries that have bet for Halal tourism although this trend is changing. Besides, tourist figures may change depending on the sources and can lead to confusion. “When we speak about Muslim tourism in Spain, British or French Muslim tourists are not being counted. Neither those coming from countries not belonging to the Schengen Area and entering Spain by car from France, for example”, says Angela Castaño, Turespaña Head of Business Area and Special Interests.

To Mrs Castaño, several reasons could explain the low presence of these tourists compared to other European countries, despite the great attraction of the Spanish historical heritage. Of 1,600 million Muslims, two thirds live in Asia Pacific, and Spain has a poor connectivity with these Muslim countries, especially with source countries and Middle East airlines

“Spain is the third most visited country in the world, we have an incomparable Islamic legacy and heritage, unique in Europe, and yet we are the ninth (destination among non-Muslim countries) behind countries like France or Belgium. We must be doing something wrong”, exposed Flora Sáez, the round table moderator and Development Director of Nur and Duha, the only Spanish travel agency certified Halal.

According to the consultant specialized in growth strategy in Halal economy Reem El Shafaki, senior associate of DinarStandard, there are three future trends in tourism: collaborative consumption or sharing economy, immersion and social responsibility. “In all of them, there is an opportunity for Muslim focused services”, said Mrs El Shafaki. New technologies are also providing opportunities to Halal industry, especially mobile apps. This is the case of HalalTrip, an Android app that allows to find Halal restaurants, check the prayer schedule and locate the nearest mosques, explained its creator Fazal Bahardeen, founder of Crescentrating.

Among this sector opportunities for Spain, we should not forget the more than one million travelers who every summer cross Spain proceeding from all Europe and heads to the Maghreb countries, in a migratory phenomenon known as “Crossing Strait Operation”, explains Antonio Santos, Director of Institutional Relations and Tourism of Innova TaxFree, who distinguishes between Arab, Halal and Muslims tourists.