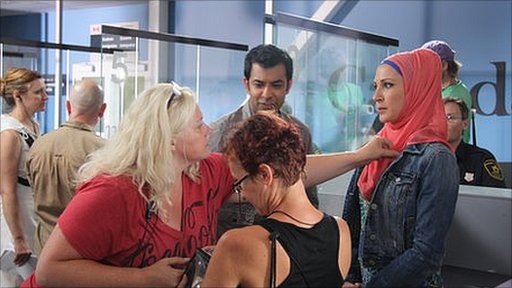 Influential American broadcaster Katie Couric has suggested a way to change attitudes to Muslims in the US.

Pointing to the success in the 1980s and 90s of TV sitcom The Cosby Show in improving relations between African-Americans and whites, she argues that a Muslim version of the show may counter some Americans’ negative perceptions of the community.

But just across the border, in Canada, this “Muslim Cosby Show” already exists. Little Mosque on the Prairie, made in Toronto, is recording its sixth and final series.

On the set, actors and crew are getting ready to record this season’s big opening scene.

The production team are giving pointers to the show’s main characters, who are standing at the check-in desk in a disused ferry terminal that is doubling as an airport:

“You’re expecting to be racially profiled, so you’re already offended before he’s done anything, you’re wound up, ok? Let’s try the scene one more time.”

Amaar Rashid, played by actor Zaib Shaikh, and his wife Rayyan Hamoudi, played by Sitara Hewitt, are returning from honeymoon. Rayyan is expecting comments at customs because of her appearance.

“My dad decided to stay in Lebanon, even though – and wait for it – he’s Lebanese… but he’s not a suicide bomber. Not ALL Muslims are suicide bombers you know,” blurts Rayyan to the customs officer.

“Why would you say that?” mouths husband Amaar, and tries to change the subject.

Rayyan interjects: “Oh, and before you ask, no, my husband doesn’t make me wear this hijab, I choose to wear it.”

The man from customs simply pokes fun at the couple for arguing.

Little Mosque on the Prairie is not all terrorist jokes, but there is a decent helping. Although its humour has been described as more like the gentle UK sit-com Vicar of Dibley than the black humour in film Four Lions, which followed a group of would-be suicide bombers.

This is a sitcom about Muslims and Christians trying to live in harmony in the fictional town of Mercy in Saskatchewan, Canada and it charts the arrival in town of a modern Canadian-born imam.

“Even the executives who made Little Mosque were worried when it went on air, about how ‘the community’ would react,” says Zarqa Nawaz, creator of the programme.

“For sure, some very orthodox Muslims said this is wrong, that we shouldn’t be doing this. But I felt overall the majority of the Muslim community felt it was innocuous… it was funny… they formed their opinions based on whether they liked the show or not.”

Of course the show has not escaped controversy, but not always from the most obvious places.

Last year Wikileaks published a diplomatic cable from the US embassy in Ottawa to Washington warning that the programme was guilty of what it called “insidious negative popular stereotyping” of Americans in Canada.

This was thanks to satirical depictions of an over-zealous US border official on the show.

On hearing about this minor diplomatic spat, American/Canadian executive producer Mary Darling immediately sent a package to the White House – the “offending” episode of Little Mosque wrapped up in a bow.

To her surprise a reply came back from US Secretary of State Hillary Clinton herself, thanking the show’s makers for “everything you’re doing to foster cross-cultural unity and understanding through comedy”.

Ms Darling is adamant they try hard not to lecture on the show.

“At the end of the day we’re talking about the oneness of humanity, normalising the ‘other’. But comedy isn’t earnest, comedy isn’t preachy.”

Those involved in the making of the show insist it is about normal life, and want to show that Muslim parents take their kids to football or hockey practice too.

But they also stress it is important that Muslim characters do not always have to be potential extremists or bear labels, such as the “lesbian Muslim”.

Zaib Sheikh who plays the central character of Amaar, the liberal imam, does however defend the need for a few border control jokes.

“I think that’s reflective of the times that we live in,” he says.

“As a Muslim, I myself am involved in moments of deep hilarity in real life when I’m at the check-point and someone says ‘random check’ and checks my passport.

“I look across the line and no random checks are going on for anyone else who is not my skin colour, and doesn’t have my last name of Sheikh. I have to laugh at that.”

The rights for Little Mosque were acquired by US TV network Fox, but the show was never remade.

Creator Zarqa Nawaz says she has come up with something at least very close to the “Muslim Cosby Show” four times already, but nothing has made it to the pilot stage in the US.

Actor Zaib Sheikh thinks this is a shame:

“I think Katie Couric was right,” he says. “Our show has allowed people, whether they’re Muslim or non-Muslim, to look at each other and say: ‘Oh yeah I get it’.”

“We had a fan of the show who said: ‘I love what you do on Little Mosque and that’s pretty high praise coming from a Jew’.”