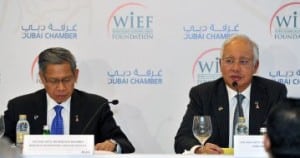 DUBAI: MALAYSIA does not regard Dubai’s drive to be a hub of Islamic economy as competition, said Prime Minister Datuk Seri Najib Razak.

Instead, this would be in the best interest of both parties to form a strong partnership with each other.

Najib said Malaysia had taken note of Dubai’s intention to transform itself to be the hub of Islamic economy.

“I think it is about forming a partnership rather than us competing with each other.

“I think if we look in terms of Islamic finance, for instance, the sector is growing more than twice that of conventional finance.

“If you have that kind of growth rate in Malaysia, and I believe also in the UAE (United Arab Emirates) and the rest of the world, then you are talking about the size of Islamic finance, which is growing by leaps and bounds much faster than that of conventional banking.

“If that is the case, there is so much for us to share. So, I see our relationship with Dubai as much more of a partnership than us competing with each other,” he said on the sidelines of the 10th World Islamic Economic Forum (WIEF) here yesterday.

Najib, who is also finance minister and patron of WIEF, said Malaysia was keen to work with Dubai as the potential for both sides to grow economically was enormous.

The prime minister described Malaysia’s cooperation with Dubai as endless and could be in many things and with so many possibilities to be explored, including in terms of listing and trading in both exchanges.

“I think the scope is very wide but it must be done in stages so that we are able to develop in accordance with our capacity and not rush into things.

“There are exciting possibilities and we look forward to working with Dubai.”

In addition to forming cooperation in human capital development in the Muslim world, the prime minister also stressed on the need to have consistency in Islamic products and certifications.

“If one product is deemed Islamic in one country like Malaysia, for instance, it has to be accepted by other nations, too.”

On WIEF’s role, Najib believed the forum could be used as a platform to deal with generic issues concerning the wellbeing of the ummah.