By Saeed Saeed – The National

An intimate documentary about boxer Muhammad Ali, a traveller’s guide to Muslim Spain, a short film about Muslims in Paris during the Second World War and a host of acclaimed regional films.

With all these on offer, on-­demand video-streaming service Alchemiya has already attracted some industry buzz as the “Muslim Netflix”.

Since launching this year, the United Kingdom-based service has steadily grown its content to include more than 50 titles.

In terms of subscribers, there has been a steady growth to the current total of more than 1,000 paid members, with a target of 10,000 by the end of the year. 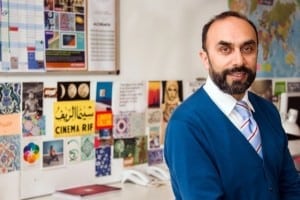 The enthusiastic reception that has greeted Alchemiya – which means “chemistry” in Arabic – is immensely satisfying to its founder, Navid Akhtar.

“Everything is going well, ­alhamdulillah,” he says. “There seems to be a real appetite for what we are producing and we are now focusing on getting more programs to keep up with it. It is really an exciting time for us.”

A veteran of the British television industry, Akhtar has worked as a producer for the BBC and Channel 4 for two decades.

In 2013, he was responsible for heading Channel 4’s Ramadan content, which featured the first live British broadcast of the call to prayer.

He explains that one of the seeds for Alchemiya came from that project. “For the call to prayer, they wanted to shoot it inside a mosque and get an imam,” he says.

“I said no – I used one of the hippest and coolest muezzins [who recite the call to prayer] and he also happened to be a graphic designer with a great voice. We put him in a funky shirt and shot him in the cool parts of London.

“I wanted to reflect the creative energy that is in the Muslim community in London.”

While travelling, Akhtar had realised that this vibe is not unique to British Muslims, but is in evidence in plenty of other cities.

“In about 2010, I began to see this same type of mindset emerging in places in Abu Dhabi, Singapore, Kuala Lumpur,” he says.

“I began to see these new types of Muslims coming in and I gave them a name: global urban Muslims – or as I like to call them ‘Gumies’. I realised they were a market that hasn’t been tapped.”

After deciding that online was the best platform for Alchemiya, Akhtar begin setting up a small team in London early last year to help launch the service.

The first step was to define what Gumies would want from such a service.

A self-described Gumi himself, Akhtar says they are not interested in overtly religious programming. Instead, they are more engaged by the cultural and artistic aspects of Islam, something not catered for by the plethora of religious television stations.

“There remains a lot of religious content that’s more focused on how to be a Muslim and it is all very prescriptive,” he explains. “We are more interested in ideas – for example, on how people fuse graffiti with calligraphy. Or on people who find new ways to dress as a Muslim but within the guidelines of the faith.”

After formally announcing the launch of Alchemiya with an introductory video in August last year, Akhtar and his team managed to secure £90,000 (Dh517,000) in seed money from British and international donors to begin sourcing content for the project.

Akhtar and his team contacted filmmakers and documentarians to gain paid access to their work. He also visited this year’s Cannes Film Festival to check out the short films.

The end result is a vibrant collection of programmes, ranging from historical documentaries about Sicily’s Islamic heritage (Sicilians of Allah), and Pakistani filmmaker Musa Saeed’s award-winning Valley of Saints, to a music documentary about legendary Egyptian singer Umm Kulthum.