Every year, a dramatic increase in food waste is witnessed in Muslim countries during Ramadan due to the uncontrolled and lavish grocery shopping. 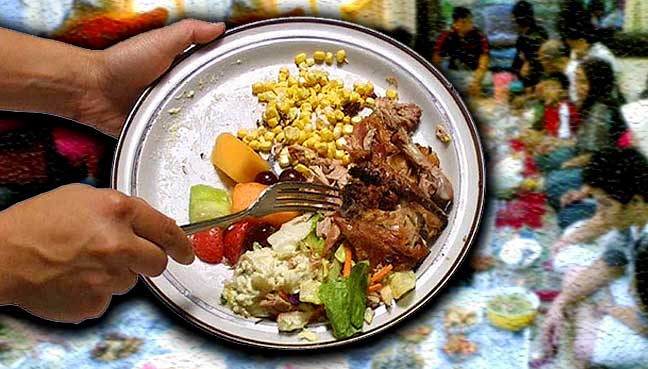 Ramadan is a holy month of fasting and prayers. Those who are sober by the day and restrain themselves against any extravagance suddenly throw caution to the wind as far as wastage of food is concerned. The elaborate Iftar (breaking of fast) parties seem to have become a competition for status symbol about the number of guests and the number of dishes. This results in wastage of huge amounts of fruits and food which could otherwise have filled the scorching bellies of the hungry people all over the world. Let us have ‘food for thought.’ Allah surely does not love extravagance. When we strive to seek the pleasure of Allah, we must obey His Commands especially about eating, drinking and not wasting food.

The United Nation’s Food and Agriculture Organisation (FAO) estimates that 1.3 billion tonnes of food is lost or wasted globally every year. In many countries, there are organizations working to tackle food wastage. For example, Hayati’s Food Aid Foundation in Malaysia works to salvage and redistribute food that would have otherwise been thrown away. It diligently collects unserved dishes from hotels, breads and canned food from supermarkets and other places to distribute to charities and soup kitchens and try to fill the needy tummies. In spite of this, food is still ending up in Malaysia’s landfills – and space is running out. In 2016, Malaysia had 170 waste disposal sites – and only 14 of these sites had “sanitary landfill” status. The government has also come out with a MY Save Food Programme – in collaboration with the FAO and the Solid Waste And Public Cleansing ManagementCorporation (SWCorp) to educate and encourage Malaysians not to waste food.

The scene of food wastage is not different in the Arab countries. According to a recent research, about Omani Rial 54m worth of food is wasted in Oman every year. The study conducted by the Sultan Qaboos University pointed out that an average Omani household wasted about a third of the food prepared. Another study of the municipal waste composition estimated that an average of 27 per cent of the total municipal waste generated in Oman was food waste. This is due to food habits of the people who seem to fill up their plates and exaggerate the amount of food served during social gatherings.

Every year, a dramatic increase in food waste is witnessed in Muslim countries during Ramadan due to the uncontrolled and lavish grocery shopping. People stack up unnecessary items that they may not need after Ramadan. The story is no different in Saudi Arabia and the United Arab Emirates (U.A.E). According to reports, the food waste in Gulf Cooperation Council (GCC) countries is one of the highest in the world.

We often hear about drought, starvation, witness wars and see millions of hungry refugees and yet waste huge amounts of food. We must strive for zero hunger in the world. No human being should sleep hungry. Keeping in mind this noble objective, the Zero Hunger Challenge was launched by United Nations Secretary-General Ban Ki-moon in 2012. The Zero Hunger vision reflects five elements which can end hunger, eliminate all forms of malnutrition, and build inclusive and sustainable food systems.

There is no better time to strive for ‘Zero Hunger’ than the blessed month of Ramadan. Our Ramadan resolution must be for elimination of wastage of food. It should start from families as basic units and culminate in the efforts of the community and the governments to do away with wastage of food. Keep the plates clean.

Ahmed Mohiuddin Siddiqui is a senior journalist, political analyst and a columnist based in the Middle East.

With a firm belief in freedom of expression and without prejudice, FMT tries its best to share reliable content from third parties. Such articles are strictly the writer’s personal opinion. FMT does not necessarily endorse the views or opinions given by any third party content provider.