By Thomas Harding – The National

That decisions made from a penthouse overlooking Monaco’s glittering harbour and famed Grand Prix track can have an impact on a man herding his sheep in the Arabian Desert is curious yet unsurprising in the modern world.

Business is business, and as a genuine businessman rather than a Russian state puppet oligarch, Alexei Fedoricsev understands that. Unfortunately for him, he is at the centre of a storm of geopolitical forces involving China, Ukraine, Saudi Arabia and almost every other country that depends on grain imports.

To the outsider it would seem strange, bizarre even, that the future of a country could to any extent depend on the ability to feed its sheep. Despite huge amounts spent on water projects Saudi Arabia will never be self sufficient for food. What it is also learning, as are other Arabian Gulf States, is that growing populations demand a lot of food. Simply put, food security is rapidly moving to the top of the economic and political agenda because new technologies around hydroponics and desalination have not been as successful as hoped for.

With the region’s population expected to grow by 40 per cent by 2030 the question of how to keep people fed is preoccupying Gulf countries. Memories of the 1970s grain embargo still linger and the sharp rise in staples since 2009 along with restless populations in some parts has placed increased importance on the issue.

Saudi Arabia is not alone in its reliance on buying food from abroad. While it needs about 70 per cent of its food imported, the UAE requires 80 per cent and Qatar a staggering 90 per cent, according to the UK’s Economist Intelligence Unit.

Curing food shortages with some radical new technology is not imminent. Instead, the countries have wisely looked abroad to establish secure food sources. Saudi Arabia and UAE are among the world’s top 10 investors in land abroad, buying farmland in Pakistan, Tanzania, Sudan and looking towards South Africa. But some of these countries come with poor infrastructure and have their own issues of political stability. 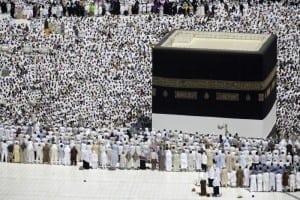 So a key challenge for Saudi Arabia in the coming decades remains managing the demand and supply of food and water with ever-growing numbers. It expects to see its population of 29 million grow by 77 per cent in 30 years. It also has a relatively youthful population, with an average age of 26, which is expected to live well into its 70s, thus putting further pressure on scant food resources.

What is more, the kingdom plans to triple the annual number of pilgrims visiting Mecca and Medina. Under the Saudi Vision 2030 it wants to increase numbers coming to perform Umrah from 8 million last year to 30 million within a decade. Pilgrims, of course, need to be fed.

The stakes are high, too, from the Ukrainian side. It wants to expand grain output from 60 million tonnes to 100 million tonnes by 2020, providing the country with much needed foreign revenue.

To fulfil that huge quota it will need to have the infrastructure in place. One can understand why Mr Fedoricsev has invested $1 billion of his own wealth back into the country, that includes not only the TIS terminal but roads, grain storage sites and parking lots for 1,000 lorries. It has been money from his own pocket but, like every successful entrepreneur, he has recognised the potential early on and gone for the long-term investment.

Ukraine has already been left discredited in its dealings with China, it now stands in danger of jeopardising its own agricultural industry and foreign direct investment as well as aggravating the Middle East’s most powerful and wealthy player.

With the loss of Crimea and the continuing conflict with Russia, perhaps Ukraine’s politicians should get on with running the country and let businessmen get on with doing what they are best at.