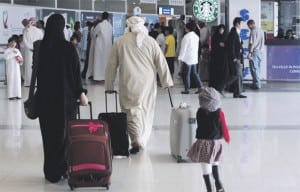 Often touted as the world’s last great untapped market, the Muslim travel sector is gaining prominence in the tourism industry, with distinct patterns and trends coming to the fore as the segment swells in numbers.

In 2018, the global Muslim travel population clocked at 140 million, according to the Mastercard-CrescentRating Global Muslim Travel Index 2019. The index projected that by 2026, this figure will surge 64 per cent to reach 230 million.

This segment’s expenditure is also expected to rise. The index predicted that the market will spend US$220 million this year, and by 2026, this will rise 34 per cent to US$300 million.

As this market grows, experts have observed the emergence of distinct travel patterns. Fazal Bahardeen, CEO of CrescentRating & Halaltrip, shared four “key drivers” of this segment: technology, social activism, the Gen Z and alpha demographic, and the environment.

“For travel companies catering to the Muslim market, these (trends) should drive the next phase of product development,” he said.

Singling out social activism, Fazal explained that Muslim travellers – especially the millennial generation – are no longer travelling just to relax, but also “looking for ways to contribute back to the community”.

He shared that CrescentRating will be partnering with the United Nations Security Council Resolutions to develop a report on social activism in Muslim travel, particularly concerning issues such as ongoing refugee crises. The report is set to release this year.

Meanwhile, more leisurely travellers are gravitating towards “slow travel”, noted Have Halal Will Travel’s co-founder, Mikhail Melvin Goh. In newfound destinations such as the small Japanese town of Gunma, such travellers are “spending a lot more time doing a lot less things”, he described.

“This is encompassing the immersive travel trend. It’s about the stories that a country can offer, and the service that (hospitality) brands have. For example, can the concierge understand and offer Muslim travellers recommendations for their needs?” Goh said.

Fazal chimed in that the trend of Muslim women travelling either solo or in small groups is also burgeoning, and will continue to grow in future.