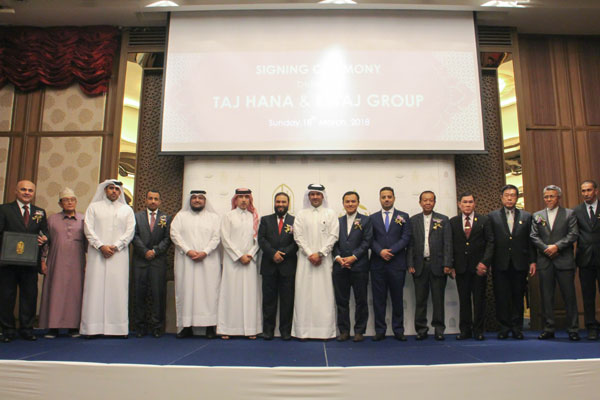 Retaj Hotels and Hospitality has expanded its portfolio to Asia with the signing of a strategic partnership with Thai group Taj Hana.

The agreement was signed in the presence of Wan Muhamad Noor Matha, former deputy Prime minister and former President of Parliament, as well as many officials from the two leading groups and more than 200 academics and investors in hotel tourism sector, in addition to landowners and medical tourism experts.

This came as a part of Retaj’s overseas expansion plan and global strategy as one of the leading hotels and hospitality companies in the Middle East and GCC region.

Under the agreement, Taj Hana will provide more than 27 hotels for Retaj Hotels & Hospitality to operate over the next five years in key locations in the Far East region, the most important of which are Thailand, Malaysia, Indonesia and China.

Retaj is aiming to provide Halal and authentic Arabian hospitality to the Arabian and Gulf tourists and investors as well as from various nationalities visiting the Far East countries.

Sheikh Jassim bin Abdulrahman Al-Thani, Qatar’s Ambassador to Thailand, expressed his thanks to the management of the Qatari company Retaj for its kind invitation to the mission to attend the signing ceremony. He wished the two sides success in their cooperation and bilateral relations between Qatar and Thailand.

Dr. Mohamed Bin Johar Al Mohamed, vice chairman and managing director of Retaj Group, also expressed his thanks for the support of the Ministry of Foreign Affairs and its support to the projects of the group abroad, and thanked the Ambassador Al-Thani and all the staff of the Qatari Embassy in Thailand for their participation in the signing ceremony and the hospitality they have extended to the delegation of the Retaj Group in Thailand.

Dr Johar added: “Retaj has established itself as a key brand, being the first and only Qatari hotel brand operating inside and outside the state and which has succeeded in spreading to many countries in Asia, Africa and Europe.”

“The Far East countries of Asia are among the most important tourist destinations in the world and the most popular among Southeast Asian countries as there is great potential for tourism in these countries,” he said.

Luqman explained that the partnership includes a provision of 2,000 hotel rooms to be managed by Retaj Hotels and Hospitality in Thailand in addition to 3,000 hotel rooms in East Asia including China, Japan and South Korea, allowing the hotel brand to provide Halal tourism in those regions.

Matha praised the strategic partnership between Taj Hana and Retaj Group, noting that it forms the base for growth and development at the economic and community level in Thailand. He added that Taj Hana and Retaj Group’s unique Halal tourism offering will make a “significant difference in the hospitality style of East Asia”. – TradeArabia News Service