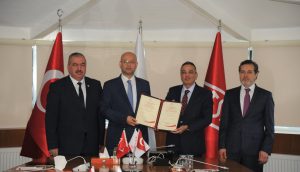 Turkish Standards Institute (TSE) successfully passed the audits and examinations carried out by the Halal Accreditation Agency (HAK), and received the authority for the Conformity Assessment of the Standards and Metrology Institute of Islamic Countries (SMIIC), and Accreditation for Personnel Certification for Organizations Carrying out the Certification of Persons Involved in Halal-Related Activities.

Speaking at the ceremony, TSE President ?ahin first gave information about the Institute’s activities and studies.

Thanking those who contributed to their accreditation authorization, ?ahin said, “Our Institute has been officially authorized by HAK to certify those who will work in the halal field within the scope of the TS OIC/SMIIC 34 “General Requirements for Organizations Carrying out the Certification of Persons Involved in Halal-Related Activities” standard published by SMIIC. “

?ahin continued his words as follows:

“TSE, which has signed cooperation agreements with hundreds of organizations in different countries, has added a new one to its field of work with the document issuing authority it has received today.

Our institute will be instrumental in reducing the existing barriers in halal trade and revealing the real potential of halal product and service trade with accreditation. With the certification and inspections of TSE, the products in this field will be healthy, hygienic and high quality at every stage from production to reaching the consumer, and awareness in this area will continue to increase.”

Stating that they started to receive requests from other institutions in the field of personnel certification, Soylu said, “The studies at TSE are very valuable for us. TSE has always made us feel the value it has shown us. Hopefully, we will continue our joint work in different fields in the same way in the future as well.”

?hsan Övüt, Secretary General of SMIIC, stated that it is very important for TSE to support SMIIC and HAK studies in every field.

After the speeches, HAK Chairman of the Board Soylu presented the Accreditation Certificate to TSE President ?ahin.

HAK, which is the first and currently the only authority in the world in halal accreditation according to the relevant standard of SMIIC for personnel certification bodies, paved the way for the certification of people operating in the sector according to common competency criteria. In this way, it was ensured that the people working in the sector adopted common criteria in their professional skills and competencies. A predictable implementation framework has been established for all parties.

TSE Personnel Certification Directorate became the first institution in the world to be officially authorized by HAK for the certification of people who will work in the halal field.