Dubai Islamic Economy Development Centre (DIEDC) held its fourth and last board meeting for 2019, chaired by Sami Al Qamzi, Vice Chairman of DIEDC and Director General of the Department of Economic Development in Dubai, on behalf of His Excellency Sultan bin Saeed Al Mansouri, Minister of Economy and Chairman of DIEDC.

Summing up DIEDC’s performance in 2019, His Excellency Sultan bin Saeed Al Mansouri noted that the Centre has remained committed to closely overseeing ongoing initiatives and launching new ones, as well as expanding its partner base in line with its mandate to implement the Dubai: Capital of Islamic Economy initiative.

He said: “During the past year, DIEDC has recorded exceptional achievements in realising the vision of His Highness Sheikh Mohammed bin Rashid Al Maktoum, Vice President and Prime Minister of the UAE and Ruler of Dubai, to establish Dubai as the global capital of Islamic economy, and supporting the priorities highlighted in the Fifty-Year Charter, issued earlier this year, such as economic diversification of the emirate.

Notably, the Centre has exceeded the KPIs set for certain initiatives while reaching others ahead of the timeline. By end-2017, the Centre successfully boosted the contribution of the Islamic economy to Dubai’s GDP to 10 per cent, increased the share of halal products in the emirate’s overall trade to 14 per cent, and elevated the UAE among the top three countries in the Global Islamic Economy Indicator.”

He added: “In 2019, DIEDC has made great strides in consolidating Dubai’s status as the global capital of Islamic economy, especially in terms of expanding international partnerships. The Centre signed a memorandum of understanding (MoU) with the Accounting and Auditing Organization for Islamic Financial Institutions (AAOIFI) to conduct joint capacity-building programmes in various jurisdictions, especially in markets new to Islamic banking and finance, as well as to drive the sustainable development of the industry. The agreement also enables DIEDC to hold a series of meetings with East Asian entities that focus on Islamic economy development.”

Addressing the board, Sami Al Qamzi said: “Following the strategic plan put forward by the board, the Centre will work around the clock in 2020 to achieve favourable results. In the coming year, we will prioritise the objective of measuring the contribution of the Islamic economy to the national GDP, as accurate statistics will allow us to direct our efforts where they are needed the most.”

For his part, His Excellency Essa Kazim, Secretary General of DIEDC, said: “In 2019, DIEDC has reached key milestones in expanding its network of partners through MoUs with entities such as Indonesia Halal Lifestyle Center (IHLC) and the National Islamic Finance Committee (KNKS). Such collaborations support the Centre’s strategy of raising awareness about the Islamic economy and strengthening Dubai’s status as a key player in the field.” 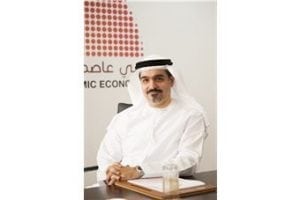 During the board meeting, Abdulla Mohammed Al Awar, CEO of DIEDC, briefed members on the progress of the Dubai: Capital of Islamic Economy initiative and highlighted the importance of public-private partnerships in this context. In addition, he provided a summary of the key findings of the State of the Global Islamic Economy Report 2019/20 that DIEDC had published earlier this year, and its global impact.

He noted that the report garnered unprecedented interest, especially since it was launched across several countries globally, reinforcing its global nature. He also presented plans for the next edition in 2020, aimed at increasing engagement worldwide through publishing multilingual versions in more cities, including locations in Africa.

Furthermore, Al Awar proposed ways to leverage recommendations from the report to serve the objectives of the new Salaam Gateway portal, as well as to develop the agenda of the fifth Global Islamic Economy Summit (GIES 2020) that will take place on the sidelines of Expo 2020.