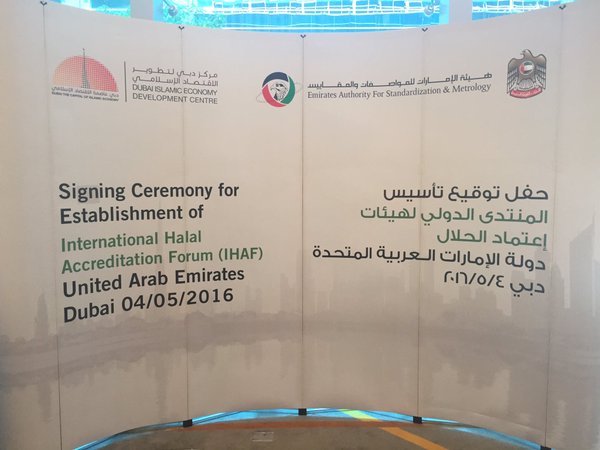 Last week the Dubai Islamic Economy Development Centre (DIEDC) and the Emirates Authority for Standardization and Metrology (ESMA) held a signing ceremony after approval of the International Halal Accreditation Forum (IHAF) by the government of the UAE.

The primary objective of establishing the IHAF is to harmonise conformity assessment practices in the halal sector, and establish Multilateral Recognition Agreements between member bodies that will facilitate halal trade globally, according to JAS-ANZ.

Representatives of 10 countries have signed a memorandum of understanding (MoU) in Dubai for the establishment of the International Halal Accreditation Forum (IHAF) to be based in the emirate.

The move is a significant development that boosts the efforts of the Dubai Islamic Economy Development Centre (DIEDC) to articulate Dubai’s ambition of emerging as a global capital of Islamic economy.

Jointly spearheaded by DIEDC and the Emirates Authority for Standardisation and Metrology (Esma), the latest initiative in the UAE reinforces the government’s efforts to shape the country into a global reference in halal product certification and enabling legislation.

Once established, IHAF will aim to regulate the halal industry and introduce an inspection mechanism that safeguards customers’ rights and industry promotions. In addition, the accreditation body will help build credibility and confidence in halal-certified food and non-food products globally, while facilitating trade movement in the halal industry and ensuring greater cooperation among regional and international organisations.

The issue of global standardisation of halal products and services has been on the agenda of several stakeholders of the Islamic economy since the nascent sector gained international recognition in recent years.

Speaking on the occasion, Mohammed bin Abdullah Al Gergawi, chairman of the DIEDC, said: “Each economic system requires a well-defined structure and culture, agreeable standards and unified references. This is why we consider the agreement to establish the International Halal Accreditation Forum an essential initiative that contributes to the development of Islamic economy. The agreement will facilitate the structured organisation of varied sectors of Islamic economy and the formation of its entities.”

He added: “Furthermore, it will enable the documentation of local and international references and lay down specifications for a unanimously agreed mechanism that will be binding on all participating countries in the Islamic economy space. This initiative will establish a unified foundation for the concept of halal and halal production mechanisms – so that we can use it as a benchmark and expand its scope to include even more countries.”

Dubai has been taking steps to beef up its Sharia regulations as part of plans to carve out an Islamic financial industry in the emirate. The UAE Cabinet on Sunday approved the launch of a Sharia Authority, a regulator to set standards for Islamic finance products.

The body will oversee the Islamic financial sector, approve financial products and set rules and principles for banking transactions in accordance with Islamic jurisprudence.