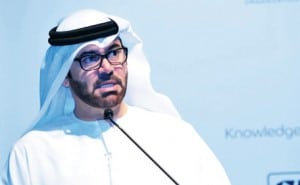 Dubai Islamic Economy Development Centre (DIEDC) has announced the opening of submissions for the third edition of the Islamic Economy Award (IEA 2015) that will be presented in Q4 of 2015.

Award submissions for all eight categories will close on July 31, 2015.

Launched in 2013 under the patronage of His Highness Sheikh Mohammed bin Rashid Al Maktoum, Vice-President and Prime Minister of the UAE and Ruler of Dubai, the Islamic Economy Award is a key DIEDC initiative that seeks to recognise innovative, world-class business concepts that are Shariah-compliant and contribute to the social and economic welfare of the community.

The award is organised in conjunction with Dubai Chamber of Commerce and Industry and Thomson Reuters.

Mohammed Al Gergawi, Chairman of the Executive Office of His Highness Sheikh Mohammed bin Rashid Al Maktoum and Chairman of Dubai Islamic Economy Development Centre, said: “This year’s award acquires special significance due to the increasing interest in Islamic economy sectors on a global level and the progress that Dubai has achieved till date in its bid to evolve as the capital of Islamic economy. The credibility of Dubai – and the wider UAE – as a leading model in Islamic economy is now well established.”

He said: “Winners of the award are chosen to best represent innovation in Islamic economy. This is in line with the Dubai Islamic Economy Strategy that is inspired by the vision of His Highness Sheikh Mohammed bin Rashid Al Maktoum and articulated by DIEDC under the guidance and direction of Sheikh Hamdan bin Mohammed bin Rashid Al Maktoum, Crown Prince of Dubai and Chairman of Dubai Executive Council.

“The third edition of the award will allow individuals and organisations to highlight key achievements and innovation that support the goals of the Islamic economy, namely sustainable and responsible economic and social development for ensuring a better future for Muslims and non-Muslims alike.”

Hussain Al Qemzi, DIEDC Board Member and Head of the Jury Panel, said: “We expect a surge in the number of nominations and submissions this year due to the growth of the Islamic economy across sectors and the increased interest and awareness generated by the initiatives already underway.

“The Islamic Economy Award has gained a formidable reputation and helped establish new benchmarks for the sector among organisations and individuals on a global scale. DIEDC is committed to encouraging innovation and acknowledging path-breaking efforts that help build the relevance and impact of the Islamic economy.”

Abdul Rahman Saif Al Ghurair, Chairman, Dubai Chamber, Member of the Board of Dubai Islamic Economy Development Centre, said: “This latest edition of the Islamic Economy Awards will once again highlight Dubai’s strategic role in promoting creativity and innovation in the sphere of Islamic economy besides taking the emirate a step closer to realising its goal of turning Dubai into a world capital of Islamic economy.

“The local and international business communities’ heightened interest in Islamic economy initiatives will go a long way in generating huge response to the awards while stimulating companies to develop and innovate new services for the overall growth of the sector.”

Abdulla Mohammed Al Awar, CEO of DIEDC, said: “Over the past two years, the Award has ushered in standards of excellence and innovation in the Islamic economy sector. We have witnessed several achievements that cater to the growth potential of the industry across diverse verticals.

“We expect the nominations for this year to surpass the level of creativity demonstrated in the previous editions and effectively highlight the efforts of all pioneers and stakeholders engaged in the development of the Islamic economy, which is increasingly being regarded as a gateway to a safer and sustainable future.”

“Thomson Reuters is proud to partner with Dubai Islamic Economy Development Centre to organise the prestigious Islamic Economy Award for the third consecutive year. The award is a statement to the world that Islamic economy sectors can serve as change agents and catalyse paradigm shifts for the wider public good.”

Dr Sayd Farook, Global Head Islamic Markets at Thomson Reuters, said: “We are privileged to independently conduct the Islamic Economy Award, the flagship distinction that celebrates and inspires innovation, growth and success across key sectors of the global Islamic economy. As our winners have demonstrated two years in a row, individuals and institutions can make a meaningful impact on their societies while being economically successful. We hope this year’s award will have a ripple effect and encourage leadership across all segments of society.”

The Islamic Economy Award 2015 will recognise global and regional leadership within the following eight categories:

In addition, a “Lifetime Achievement Award” will recognise an outstanding business leader for demonstrating inspired leadership while positively influencing the Islamic economy and making an impactful contribution to the sector.