Consumers should be aware of halal norms to avert contamination, mis-selling

Sharjah: Back to back local as well as international cases of contamination of halal food have brought into focus the need for general consumers to be aware of halal rules and regulations.

Last week, in a startling revelation, UK’s Food Standards Agency was informed by the ministry of justice that a number of meat pies and pastries supplied to prisons in England and Wales were labelled and served as halal but contained traces of pork DNA. The scandal came days after a UK super market found its frozen beef burgers supplied by an Irish meat processor to contain horse meat and pig DNA.

Closer home in the UAE, some residents were shocked to find that restaurants in five-star hotels used same kitchen equipment on halal and pork products.

Last month, in the US, a global fast food chain and one of its franchise owners agreed to pay US$700,000 to members of the Muslim community to settle allegations a Detroit-area restaurant falsely advertised its food as being prepared according to Islamic dietary law.

“Such instances of food contamination and mis-selling are worrying, and at the same time unacceptable, to any Muslim irrespective of the country or region. Such incidents would have offended and distressed a large number of Muslims across the world. Several times such instances are reported even when there are clear regulations for food establishments to abide by while handling and selling pork products,” said Mr. Saif Mohammed Al Midfa, Director-General of Expo Centre Sharjah. 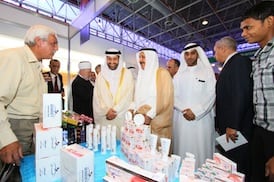 Mr. Midfa pointed out that the public should be aware of proper halal rules and regulations while buying food items, stressing role of the Halal Middle East trade fair and congress in educating the Muslim community on how to ensure that what they are consuming is genuinely halal. Halal Middle East will be held at Expo Center Sharjah from December 16 – 18, 2013, that includes Halal Expo and along with Halal Congress Middle East.

“Consumers need to be aware the halal norms governing the system for preparing and serving food products… for example, in case of meat how animals are slaughtered, labelled, stored, refrigerated, cooked and served,” said Mr. Midfa.

“Not just consumers, but retailers, suppliers and restaurants too need to be aware that people have a right to know what food they are eating and it is their duty to describe their products correctly. They should adhere to halal norms prescribed by respective authorities and should not mess up products or cut corners by padding out food with cheaper meats to boost profit,” added Mr. Midfa.

Besides stressing the need for being aware of halal procedures, it also underscores the requirement of common halal standards for food as well as other products and services, reflecting the importance of a show like the Halal Middle East.

Moreover, global attention is now on the UAE, as the Emirates Authority for Standardization and Metrology (ESMA) is working on unified standards for halal food and cosmetics, which, once approved by the OIC, will be introduced in all Islamic countries in the near future.