The New Zealand Islamic Development Trust (NZIDT) has been officially unveiled as being accredited by the UAE as a halal certifying body at Gulfood today. 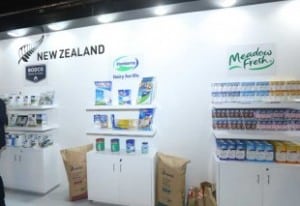 Speaking to Caterer Middle East, New Zealand Trade & Enterprise trade commissioner and deputy consul-general Haylon Smith said: “This is one of the first ceritfying bodies in the world to achieve that accreditation so obviously that’s fantastic news for New Zealand.”

He continued: “For a New Zealand certifier to achieve that status… it shows the importance of how closely the UAE and New Zealand relationship is.”

Smith said New Zealand holds the halal sector to high value, and he hopes that the scheme which has been developed by the standardisation organisation will “serve as a template for implementation by all GCC states”.

Essentially, this means that NZIDT will be able to certify halal products in New Zealand, with the authority granted by the UAE.

Smith added: “That’s a huge step forward and credit to NZIDT for making it possible to reach that level so quickly, and I think that shows the importance of the UAE as a market for New Zealand exporters and NZIDT as an organisation.”

Smith revealed to Caterer that New Zealand have been increasing by 10% YOY over the last decade. He concluded: “It’s had some ups and downs based on commondity prices but generally speaking for a lot of the high end products, the growth has been phenomenal.”

The GCC Accreditation Centre has also accredited Halal Food and Feed Inspection Authority (HFFIA) in The Netherlands and Rax for Quality Certification Services in the UAE for international Halal certification.