Mr Roberto Gelfi, the President of Casearia Agrinascente, the company behind the innovation of ‘Parma 2064’, the world’s first Halal certified Parmigiano Reggiano cheese, was in London last week to launch it into the UK market at this year’s ‘The World Cheese Awards’ . There has been a wait of two years for this new addition to the Halal marketplace because of the 24 month aging process of this famous Parmigiano Regiano PDO cheese.

The ‘cut’ of the first wheel passed the qualitative test of the “hammering” by the Consortium of Protection of Parmigiano Reggiano PDO at the World Cheese Awards, certifying the absence of defects listening of the sound of the wheel under the special hammer.

The Parma 2064 Cheese is able to encapsulate all the taste, nutrition and traditional values of a Parmigiano Reggiano PDO with a Halal Certification from the Halal International Authority for a new dimension, which could move it from niche to mainstream in this emerging market.

Mr Gelfi said that Casearia Agrinascente SAC Fidenza is an innovative and forward thinking company in Italy and that they wanted to answer a gap in the market with the world’s first Halal Parmigiano Reggiano cheese, Parma 2064. He was delighted to have been able to launch it at The World Cheese Awards for the UK market exclusively, until they decide to branch out from there. 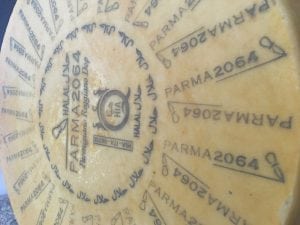 order to achieve this they worked with the Halal International Authority for over two years to receive their Halal certification. One of the first things they needed to do for this was to source Halal rennet to produce the cheese. Animal rennet is the only rennet that is permitted by the Consortium of Protection of Parmigiano Reggiano PDO, so just changing over to vegetarian rennet used is some other cheeses was not an option.

Casearia Agrinascente dairy and its members decided to devote time and energy to the creation of Parma 2064 in the belief that food serves to express people and their culture. With the new Halal certified Parma 2064 they are now able to answer the trade requests demanded by consumers and cheese markets around the globe. For a modern company today, they realised that the ability to build cultural bridges is a basic necessity and an investment for the future.

Italian food is in the top ten cuisines of the world, and the piece de résistance is of course the grating of Parmigiano Reggiano over it after serving. To now have Parma 2064 as a Halal option can be nothing but a successful entry into the marketplace.

Mr Gelfi further commented: “The markets we turn to are vast, young and in tune. They are already accustomed to the consumption of dairy products and express a high demand for quality. In this context, Italian products are highly appreciated and sought after. Halal certification of them is at the same time a further proof of attention to quality. We are open to foreign markets in the belief that our product, for the tradition and the quality it expresses, can play an important role in the international scene. The future of Parmigiano Reggiano is certainly in the diversification of productions.”

Parma 2064, the World’s first Halal approved Parmigiano Reggiano Cheese launched and won it’s first award on Friday 17 November at the World Cheese Awards. Winning the Bronze award for its debut at the international event with a 24 month aged Parma 2064 product.

Casearia Agrinascente the company behind this innovative new product to market also won Silver for its 24 month and 36 month aged Parmigiano Reggiano Cheese at the awards last week.

President Roberto Gelfi said “ We are absolutely delighted with our first entries and awards, and are exceptionally proud with the result for the Parma 2064 new product entry. A first we believe for the launch of a new product to receive an award on the same day.”

The Parma 2064 Cheese is able to encapsulate all the taste, nutrition and traditional values of a Parmigiano Reggiano PDO with a Halal Certificiation for a new dimension, which could move from niche to mainstream in this emerging market.

The company is now looking forward to supplying the Cheese in the UK directly from Italy and also with Bianca & Mor at Borough Market.