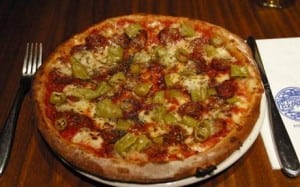 Pizza Express has been using only halal meat for years (See Article Two below). All those orangey chicken bits that top pizzas and fill calzones come from poultry that have been slaughtered in the Muslim ritual way. It turns out, for of the biggest supermarket chains also sell meat that has been slaughtered this way — though their packaging doesn’t say so.

The pizza chain explains this on its website — but religious leaders have written to the Daily Telegraph to call for explicit labels from now on. Just as a Muslim needs to know that their meat is halal and a Jew that their meat is kosher, the rest of us should know what kind of meat we are eating.

The incident has exposed something nasty: we’ve all been eating halal for years, and never seemed to care. No one talked about little lambs, or chickens, being slaughtered cruelly. Suddenly, this has changed. Could it be that the change is down to anti-Muslim prejuedice?

Earlier this year, the new Chief Vet sparked a row when he said that ritual slaughtering should be banned. It was cruel to animals, John Blackwell bleated, going against all scientific evidence. Many agreed, claiming that halal slaughter did not belong in a civilised culture. Others – I was one — argued that an individual’s right to practice their faith trumped the rights of a lamb to be stunned. The debate grew heated — and nasty: fuelled, I would argue, not so much by traditional sentimentality about cutesy animals as by anti-Muslim prejudice.

Animal rights easily become a proxy for Islam-bashing and anti-semitism. Get at these people through their diet. It’s an ancient tradition, rising back to the Middle Ages, when bigots liked to say that Jews ritually slaughtered Christian babies. This blood libel would be unthinkable today, in our “civilised culture” — but it finds an echo in the attacks on the dietary laws of faith communities. These days, it’s not just Jews, it’s Muslims, that can be targeted.

Ritual slaughter turns out to be cheaper than the traditional methods. This will mean retailers like Pizza Express will continue to serve halal meat against the bigots’ opposition. Let the Chief Vet chew that over.

The High Street restaurant chain says it serves only ritually-slaughtered chicken on its menu, provoking anger among campaigners

Pizza Express is serving ritually-slaughtered halal chicken in every dish on its menu that uses the meat, it has emerged.

But customers are only told that the chicken they are eating is killed in line with strict Islamic law if they ask staff, as it is not stated on menus.

Under Islamic law, chicken can only be eaten if the bird’s throat has been slit while it is still alive. A Koranic verse is also recited during the ritual.

Some non-Muslims object to halal because they claim the method of slaughter can cause unnecessary suffering.

The firm, which has 434 restaurants across the UK, states on its website: “All our chicken is halal approved but it is important to note that all birds are stunned before being slaughtered.

“Our chicken supplier is accredited by the British Retail Consortium. This means it meets the global standard for food safety and legality.”

Popular meals such as Pollo Ad Astra pizza, Pollo Pesto and the salads Chicken Caesar and Pollo Pancetta are all made with halal chicken.

A spokesman said: “At PizzaExpress the quality and integrity of our ingredients remain our number one priority, and we have always been happy to provide information on our ingredients to our guests.

“It is no secret that all the chicken used in our dishes is halal slaughtered. Our teams in restaurants have and always will provide this information, and in addition it is available on the customer service section of our website.

“We’re committed to high animal welfare standards and as such the birds are stunned before slaughter.

“The quality, safety and integrity of our products is paramount and our chicken supplier is accredited by the British Retail Consortium. This means it meets the global standard for food safety. None of our other meats are halal.”

The revelation has provoked anger among campaigners. Stephen Evans, of the National Secular Society, told The Sun: “Unsuspecting members of the public are routinely being duped into buying meat from religious slaughter methods.

“Meat should be properly labelled, enabling consumers to make an informed choice about the food they’re buying.”

The halal meat market in the UK is worth around £2.6billion a year and it is expected to grow dramatically, with Britain’s Muslim population of 2.7 million predicted to double by 2030, according to the Pew Research Centre.

He added: “Keeping halal and non-halal meat is expensive and creates the risk of non-halal being fed to Muslims, which shops and restaurants know will cause uproar. Maybe they think non-Muslims are less likely to complain.”

Last week it was revealed that Subway has removed ham and bacon from almost 200 fast food outlets and switched to halal meat alternatives in an attempt to please its Muslim customers.

Turkey “ham” and turkey rashers will be used instead in 185 of its stores, where all the meat will now be prepared according to halal rules.

The chain, which has around 1,500 outlets across the UK, explained its decision by saying it had to balance animal welfare concerns with “the views of religious communities”.

Traditional halal slaughter has animals having their throats slit before bleeding to death.

In Arabic the word halal means “permitted” or “lawful” and covers anything that is allowed or lawful according to the Koran.

It is often used to indicate food – particularly meat – that has been prepared in accordance with Muslim principles and techniques.

In Britain, killing an animal without prior stunning is illegal but the law gives special exemption to Muslim and Jewish meat producers on religious grounds.

In the UK there are thought to be around 12 abattoirs dedicated to unstunned slaughter, while hundreds practise stunned halal slaughter.

The RSPCA said: “We recognise religious practices should be respected but we also believe animals should be slaughtered in the most humane way possible.”

A spokesman for People for the Ethical Treatment of Animals said: “As long as animals are still killed for food, banning the most inhumane slaughter methods – in which animals have their throats cut while they’re still conscious – is a step in the right direction.

“No religion needs to slaughter animals for food, so the kindest thing that we can do for all animals is to leave them off our plates by adopting a vegan diet.”