Founder Faisal Masood and the 5th American Muslim Consumer Conference (AMCC) team provided a first rate experience for many new attendees who expressed positive accolades after hearing perspectives from successful industry leaders at the AMCC on the 15 November 2014 held in Newark, New Jersey.

Accelerating into the launch of DinarStandard’s American Muslim Consumer Market Study 2014, The Muslim Green, Founder and CEO Rafi-uddin Shikoh and Senior Associate Iman Kouvalis revealed that the America’s Muslim population is estimated at 5.4-5.7 million. The estimated Food & Beverage expenditure is $13 billion, and 93 percent indicated that they bought Halal food. The amount of disposable income is estimated at $98 billion. The $6.9 billion spent on Education is significantly more than most demographic groups; and with 36 percent in the 18-29 age group, Muslims exceed the general population which has 22 percent in that segment. The free Executive Summary is available at http://www.dinarstandard.com/american-market-2014/.

The significance of the study results was processed with the help of Dr. Hatem Bazian, Co-founder and Academic Affairs Chair of Zaytuna College; Errol Schweizer, Executive Global Grocery Coordinator of Whole Foods Market; Adnan Durrani, CEO of American Halal Company and the Saffron Road brand; and Shahed Amanullah, Co-founder and CEO of LaunchPosse, Founder of Zabihah.com. During their session, Dr. Bazian discussed the prevalence of higher educated Muslims relative to the general population, along with the crippling issue of student debt and opportunity based in financing solutions. The Saffron Road brand has successfully gained vast market share among mainstream consumers while other popular brands are declining in popularity. The rationale is that many well educated consumers align with the values like wholesomeness, fair trade, non-GMO, humane treatment of animals, and quality products that Saffron Road and Whole Foods Market strive to deliver.

Co-founder and Event Director of AMCC, Sabiha Ansari, awarded the 2014 Multicultural Award to The Halal Guys who have become a New York City landmark for their Halal trucks that sell delectable meals at 53rd St. and 6th Ave. The company has fans that have set up a separate website, and they even have a Wikipedia listing. 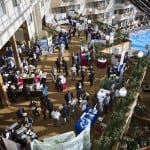 The ever popular Entrepreneur Showcase was headed by Adnan Durrani and assembly of judges: Larry Richards, International Investment Development Officer, Ontario Ministry of Economic Development; Shama Zehra, Founder and CEO of Aligned Independent Advisors; Ifty Ahmed, General Partner at Oak Investment Partners; and Farah Khan, Principal of Catterton Partners. From a field of about fifty applicants, six lucky companies were chosen to be evaluated, grilled with questions, and had complimentary advice given to them by the experts.

Addressing the increasing prevalence of mainstream companies integrating Muslims in advertising and focusing campaigns to the niche, moderator Ibrahim Abdul-Matin, author of Green Deen, led a jovial discussion with Dr. A.J. Wilson, Chief Editor of the Journal of Islamic Marketing; Ibtihaj Muhammad, member of the U.S. National Fencing Team and CEO and Founder of Louella; Mohammed Issa, Founder and CEO of NoorVitamins; and Sharif El-Gamal, Founder and CEO of Soho Properties and Co-founder of Park 51.

The American Muslim Consumer Conference sold out with a crowd of over 400 in Newark, New Jersey on November 15, 2014 and delivered vision, motivation, and empowerment fueled by prime networking, thought leadership, and access to investors. Magatte Wade, successful CEO and founder of Tiossan high-end skin care, was an enigmatic keynote speaker whose mission is to challenge the public’s perception of the continent of Africa. She, along with NYU Chaplain Khalid Latif, inspired the audience to recognize that Muslims must do positive actions to recast the negative and inaccurate stereotypes propagated by media, and perhaps the best way to do that is to build exemplary companies and organizations that encompass the positive and compassionate values of Islam. Wade’s mantra is ‘Criticize through Creativity,’ and Latif revealed that from the many narratives he hears in his roles as chaplain and businessman in Manhattan, they indicate to him that American Muslims need a boost in self-confidence and delivery of excellence in order to make more positive strides.