There once was a time when Unilever executives would give their R&D team instructions for developing a new product that included the item’s target consumer group of, say, women between the ages of 18 and 35.

“It’s a secular trend we’re seeing as the world becomes a more complicated place,” Jope explains. “In that context, we believe we will need a more sophisticated and more complex portfolio to win in the future.”

Enter Unilever’s newest personal care brand—Love Beauty and Planet, which launched in the U.S. this week with products including shampoos, conditioners, and body washes.

The roll out is part of Unilever’s latest efforts to respond to a fragmented marketplace and shift its portfolio toward higher-growth areas. Expect the company to launch a half dozen new personal care brands between this year and next, Jope says.

In the case of Love Beauty and Planet, Unilever is going after two “growth vectors,” as Jope calls them, that are particularly attractive to the highly coveted millennial cohort: “brands with purpose” and the natural segment.

Products considered “natural” now make up a quarter of the personal care market, says Jope, and are growing at twice the rate of the rest of the sector. Meanwhile, brands that fall under what Unilever identifies as “Sustainable Living” grew more than 50% faster than the rest of the company’s business last year, and also delivered more than 60% of the Unilever’s 2016 growth.

Jope says the R&D team’s mandate for Love Beauty and Planet was to create a product that was formulated and sourced in as sustainable a way as possible.

The team ended up using “ethically sourced” oils and extracts—such as French heirloom lavender and Bulgarian rose—as the basis for its fragrances. The bottles are made from 100% recycled plastic and are 100% recyclable (they’re still working on the cap). The products also use a “fast-rinse conditioner technology,” which has the environmental benefit of requiring less water to rinse the product out of hair.

The Love Beauty and Planet line is free from Parabens—a kind of ingredient that many consumers looking for natural products try to avoid—but Jope says that the company didn’t want to go too far down that road. “I want to make sure that we don’t participate in the irrational demonization of safe and effective chemicals,” he says. “We do not do lightly free-from claims. It’s not good for consumers.” 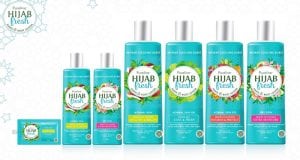 The company has been on a wave of new product launches that Jope says will continue as Unilever attempts to fill gaps in its portfolio. For example, in September the company launched Pureline Hijab Fresh in Indonesia, a body lotion designed for the “modern Muslim consumer,” which is a fast-growing demographic, he says.

Unilever has also been pursuing a parallel strategy of acquiring companies in hot areas. In 2016 the company bought eco-friendly cleaning products company Seventh Generation, as well as Dollar Shave Club to get into the male grooming category and direct-to-consumer market.

Despite the market’s segmentation, Jope doesn’t believe the era of the billion-dollar brand is over. The majority of sales will still come from big, core brands—with the caveat that they have to stay relevant, he explains.

“Big brands we believe are here to stay,” he says, “But they’ll only be big if they tap into big needs and trends.”