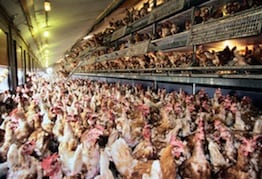 BRAZIL – Brazilian Agricultural Cooperative Lar promotes halal slaughter in 100 per cent of its poultry production. Demand arose from countries in Europe and the poultry is currently sold in seven Arab countries.

Agricultural Cooperative Lar, in Medianeira, Paraná, does not have its main export market in the Middle East, however, 100 per cent of production of chicken follows halal slaughter, which means that the animals were slaughtered according to Islamic regulations.

The company slaughters 246,000 chickens a day, of which 50 per cent is exported, reports Brazil-ArabNews.

“We have had this [halal] certification for several years, when we didn’t even export to the Middle East. Due to the demand of the European countries, we sought certification. So, when we entered the Arab market, this sped things up significantly,” said Giovana Rosas, export manager at the cooperative.

Currently, Lar exports to the United Arab Emirates, Saudi Arabia, Oman, Lebanon, Libya, Kuwait and Jordan. These countries represent eight to 10 per cent of foreign sales of the cooperative, but other nations also import the halal chicken produced in Medianeira, including Germany and the Netherlands. It was these countries that generated the demand for certified chicken and, today, answer to 25 per cent of the cooperative’s foreign sales.

Japan, South Africa and other countries in Europe also buy chicken with the halal stamp. Saudi Arabia is the main client in the Middle East, buying 90% of the chicken that goes to the region.

Exports to the Arabs began three years ago. Sales to the region include chicken cuts, mainly chicken and drumstick fillets. “We participated in the Sial fair, in Paris and Germany. There, we had access to several clients who already knew our work,” said Rosas regarding the start of sales to the Middle East.

Cuts of the cooperative from Paraná are sold to distributors in the Arab countries. “We have not yet entered the retail market,” said Rosas. According to the manager, the cooperative does not forecast participation in fairs in the region. “We are expanding our productive capacity. When we increase the plant capacity, we will analyse the possibility of participating in other fairs abroad,” she said. The expansion of the cooperative’s plant should be concluded by 2013.

However, according to the manager, the cooperative is open to receive orders from new Arab clients. “As we have 100% halal slaughter, we may supply,” she said. According to Rosas, in Brazil the chicken from Lar does not have halal identification on its packages. “We target the external halal market, which understands certification as a differential,” she said.

Established in 1964, the Agricultural Cooperative Lar has 8,641 associates and over 6,000 employees. Apart from chicken, it also produces grain, preserves, sweets, eggs, coffee and other foods. In 2011, revenues totalled R$ 1.87 billion (US$ 922 million).