A growing number of diners in the Gulf are tapping into smartphone applications to snap up meal deliveries, a trend that is expected to accelerate as technology redefines the food sector and attracts investment.

Nearly 87 per cent of food operators in the GCC are listed on food delivery apps and 60 per cent of consumers use apps to order food, according to investment banking advisory firm Alpen Capital. Food foraging online is primarily driven by residents’ busy lifestyles and the need for convenience.

“There is a lot of capital inflow targeting these apps and a lot of funding going into food tech rather than brick and mortar,” Krishna Dhanak, executive director of Alpen Capital, told The National on Tuesday, after releasing the GCC Food Industry report. “Life is hectic, how many people today are cooking food at home? Working couples don’t have time, the convenience of packed food and ordering online is attractive.”

Demand for food in the GCC is expected to grow 3.3 per cent annually over the next five years, driven by a growing population, an influx of tourists, high disposable incomes and forecasts for economic recovery, according to the report. Saudi Arabia is likely to remain the biggest food consumer in the region through to 2023, fuelled by job-creation initiatives, religious tourism and government allowances for citizens that lead to higher consumer spending. Oman is set to become the fastest-growing food consumer in the GCC with a compounded annual growth rate of 4.6 per cent due to its young, urban population and increasing 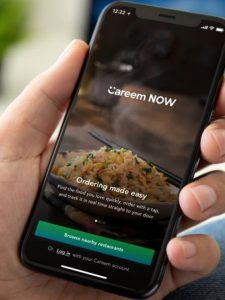 Online food delivery services are burgeoning in the region with the entry of UberEats, CareemNOW, Deliveroo, Talabat and others.

“Possibly what will happen is the maturing of this market, apps will get acquired and we will see consolidation in the next five years,” Mr Dhanak said.

“Technology is re-defining the F&B sector in the GCC as the rising youth population is more tech-savvy and values the access to information and convenience along with the experience,” the report said.

The industry continues to grow despite challenging economic conditions thanks to GCC demographics such as the rising number of working couples, evolving preferences of tech-savvy millennials, higher proliferation of distribution channels and government measures to expand their non-oil economies, it said.

To meet this growing demand, GCC governments are focusing on implementing various food security initiatives to reduce their reliance on food imports and secure steady supplies for their growing populations.

This is driving government investments in overseas farmlands, improving local food production and ventures for aquaculture domestically. Companies such as Fish Farm are rearing the UAE’s first ever homegrown Atlantic salmon.

In the Global Food Security Index 2018, the UAE ranked 31st and Saudi Arabia 32nd among the 113 countries analysed by the index.

“A high dependence on food imports exposes the GCC countries to global food price fluctuations,” the report said. “Geopolitical risks make the vital trade routes highly vulnerable. Any disruption could cause an adverse impact on the food supply chain to the region.”

The food industry is also facing challenges from the period of fiscal consolidation by GCC governments following a three-year drop in oil prices, Alpen Capital said. The escalating US-China trade war may impact food supplies while a strong dollar may lead to a drop in the influx of European tourists to the region, it said.

Alpen Capital said the most notable trend in the GCC food industry is the rising popularity of organic food, following the rise in obesity, diabetes and other dietary and lifestyle related diseases.