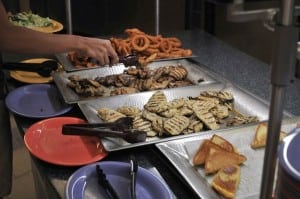 Halal food is now available on a rotational basis in the residential college dining halls. So far, halal food has been offered two or three times a week in one dining hall each day, although a fixed schedule has not been drawn up yet.

The addition to the menu is a result of the work of the Undergraduate Student Government Dining Policy Initiative, which has been working with the campus Muslim chaplain Imam Sohaib Sultan and the Muslim Students Association since last semester to make halal food more accessible on campus.

Class of 2015 Senator Nihar Madhavan, who led the Dining Policy Initiative, said one of the goals of his project is to ensure that the dining options are meeting the needs of students on campus. Therefore, when President of MSA Sarah Qari ’16 expressed her concerns about the scarcity of halal options, USG started looking for ways to resolve the problem. Qari said that the goal is to make halal food available all days a week.

“Before [this project] there used to be, and actually still continues to be, halal food options available through the Dining Services in frozen packets. A student can go up to the chef and ask for a frozen packet to be prepared for them,” Sultan said. “But unfortunately for too many students this was a little bit tedious and also wasn’t necessarily very appetizing either. You know how packaged food is.”

Because of this, some Muslim students stopped eating meat dishes all together.

“I knew you could ask for stuff at the dining halls, but it’s pretty nerve-racking to come in when you’re a freshman and say ‘I want a special meal.’ Secondly, you have to wait at least 20 minutes for your food to cook, so it was unfeasible sometimes,” MSA social media chair Safa Syed ’17 said. “I had it very, very rarely until the end of the year.”

Qari and Sultan met with Dining Services several times once the initiative began to discuss ways to address the dietary needs of Muslims, Sultan said. He added that Dining Services was “absolutely incredible in terms of wanting to accommodate this request.”

Muslim students were also able to voice their opinions directly when representatives from Dining Services attended the MSA’s Friday prayers.

During their meetings, Qari and Sultan were able to clarify what it meant for food to be halal.

“One of the things that emerged after a while was that for a long time Dining Services thought that when we were asking for halal food, we were expecting certain ethnic foods. They were like, ‘We don’t know how to make that food,’” Sultan said. “But once we clarified to them that it can be whatever food you already make, just with halal meat, the process became so much easier. That was our opening.”

Sultan explained that halal food is food that a Muslim is permitted to consume according to Islamic sacred teachings.

Syed also noted that halal meat must follow certain restrictions, including that the animal it comes from must be treated humanely, eat a natural diet with no animal byproducts, be cut so that it does not feel pain and have all its blood drained out. When it is cut, the slaughterer must say the name of Allah out loud, according to Syed.

“It was a big change, actually. Especially at the end of last year, when it started — I think May or late April — they started having halal beef lasagna or halal beef roast,” Syed said. “It was really good food, too.”

“[Muslim students] appreciate the quality of the food — it’s fresh,” Qari said, “It’s really interesting because halal meat ends up getting eaten by anyone. It’s a nice addition, with a minimal effect on anyone else.”

Special events can also feature halal food now, like the Muslim Life barbecue at the beginning of the year, which Dining Services prepared.

“I think that by providing halal food on campus, Muslim students and faculty just feel more of a sense of feeling at home,” Sultan said. “So the increase in halal food options starting late last year and into this year have really, I’ve seen, made a real difference in the lives of students. They’re really excited about it.”