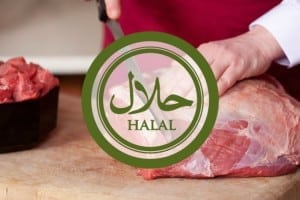 Halal and Kosher meat could be labelled by method of slaughter after Brexit amid concerns that animals are suffering needlessly before being killed.

Tory MPs and leading vets have for years raised concerns that the failure to stun animals before killing them under some methods of slaughter is cruel.

George Eustice, the farming minister, has now given a clear indication that the Government will consider introducing labelling after the UK leaves the European Union.

It comes after Michael Gove, the Environment Secretary, vowed to ensure that animal welfare standards will be even higher after Britain leaves the EU.

Mr Eustice said: that consumers should be able to make an “informed choice” about what they decide to buy.

He said: “There is no national or EU requirement to display the method of slaughter on meat products but where this is included it must be accurate.

His concerns were echoed by the British Veterinary Association, which has called for a complete ban on the slaughter of animals without stunning them.

John Fishwick, President of the British Veterinary Association, said: “If slaughter without stunning is permitted, we believe that any meat or meat products from these sources should be labelled to enable consumers to make an informed choice about the food they eat and to know if the animal has been stunned prior to slaughter.

“Due to the complexities of labelling legislation and the ongoing discussions in Europe about the issue, UK Ministers have to date argued that it would not make sense for the UK to introduce domestic labelling of non-stun meat. With the UK now exiting the EU there is an opportunity to label meat more effectively.”

Shimon Cohen, campaign director at Schechita UK, said: “The Jewish community fully supports the notion that consumers have every right to know what they are eating.

However, we also feel it is extremely important to distinguish between honest, even-handed labelling and what has been proposed thus far (stunned or non-stunned) which could so easily amount to an inadvertent deception of the consumer and an affront to faith communities.

“If we want to ensure true consumer information, they should be told the method of slaughter – captive bolt shooting, gassing, electrocution by tongs or water, drowning or any of the other approved methods.

“Labelling just one process inevitably sends a message that one method is somehow inferior to other methods; labelling stunned/ non-stunned will not suffice as the shechita process incorporates an integral stun; stunning, dispatching and exsanguinating the animal in one rapid action, conforming to all relevant EU definitions of stunning and to all norms of animal welfare.”

Omer El-Hamdoon, Deputy Secretary General of the Muslim Council of Britain: “The animal must not have died before slaughtering. The issue is whether the stunning causes the animal to die. This is one of the contentious issues of stunning.

“We fully support the labelling of meat, and even to make that distinction between stunned meat and unstunned meat. But it’s important that all meats are labelled accurately.

“Even if animals were stunned we should know what method has been used. “We disagree with the BVA that this is cruel. We don’t believe there is enough evidence to suggest the animal is suffering. It is possible that the bolt could also be cruel to the animal, or placing a chicken through electrocuted water is also painful.