The British Veterinary Association (BVA) has called on the Welsh government to end talks with a halal meat provider over an approved non-stun slaughterhouse.

Rebecca Evans, deputy minister for farming and food told the BVA the Welsh Government was “in dialogue with a private company regarding job creation at an abattoir in Caernarfon”. 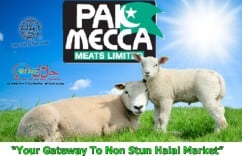 The abbatoir in Caernarfon is owned by halal meat specialists Pak Mecca Meats, which supplies meat from non-stun animals.

Non-stun slaughter is prohibited in the European Union, however an exemption on religious grounds allows for animals to be slaughtered without stunning if the meat is to be consumed by certain communities – dhabihah slaughter for halal food and shechita slaughter for Kosher food.

However the BVA is petitioning to bring an end to all non-stun slaughter methods in the UK.

John Blackwell, president of the BVA, said: “BVA advocates that all animals which enter an abattoir be stunned before being killed – this view is based on scientific evidence that shows that non-stun slaughter allows animals to perceive pain.”

A Welsh government spokesperson responded: “The welfare of animals is a priority for the Welsh government, as demonstrated by our Animal Health and Welfare Framework which was introduced by the deputy minister for farming and food in July 2014.

“We have implemented EC Regulation 1099/2009 on protection of animals at time of killing.”

Last year the Halal Authority Board (HAB) wrote to the BVA accusing it of “continuous attacks against the Muslim and Jewish communities”.

The BVA reported its e-petition to ban all non-stun slaughter methods has reached over 95,000 signatures.